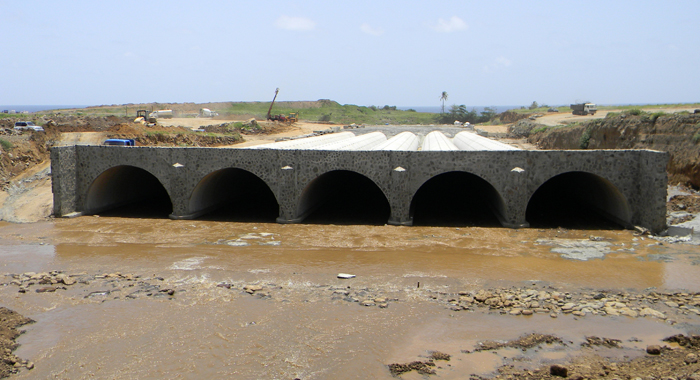 Work to divert the Yambou River under the runway of the international airport under construction at Argyle is complete.

About one year after work began on the spanning of the Yambou River, the river is now flowing through the corrugated steel culverts installed for that purpose.

On Thursday, the route was opened to allow the water to flow through the culverts.

Several persons were on hand to witness the event.

Five rows of corrugated steel culverts 1,000 feet long have been installed at the river crossing. The backfilling of these culverts using fluid soil have begun with most of the centre of the culverts been covered.

Technical Advisor to the IADC Leonardo Perez expects this process to take one month.

Meanwhile, the levelling process to fill up the area where the culverts have been installed at the 191 channel continues and is close to completion.

When completed, the paving crew will be able to continue the asphalting of the runway going across to the 220 or Yambou River channel.

The EC$700 million international airport, the nation’s first, is expected to open this year, seven years after construction began.

It was initially scheduled to open in 2011, but has missed completion deadlines annually since then.