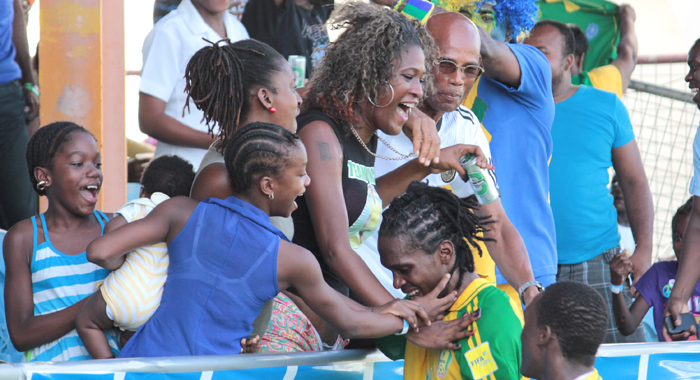 Tevin Slater is celebrated as he scores against Aruba on home soil. He also came through for his team in the away leg. (IWN photo)

Striker Tevin Slater, known for his lethal finishing in front of goal, may have scored what is possibly up to this point his most important goal for his country, when he converted in the 84th minute in a 1-2 losing result against Aruba Tuesday.

Slater, who was voted the St. Vincent and the Grenadines Football Federation’s Footballer of the Year for 2014, came to the rescue of his team after they had fallen behind 0-2 and with the stark possibility of being eliminated from the CONCACAF Zone Russia 2018 World Cup Qualifiers.

The tie stood at that stage at 2-2 after “Vincy Heat” had won the first leg last Friday at the Arnos Vale Sports Complex 2-0. And with the Vincentians under a tremendous amount of pressure and looking at their most vulnerable, the fisherman from South Leeward, delivered what may be equivalent to be five fish and three loaves, with his strike six minutes from time.

The unassuming and languid striker was fed a pass midway in the Aruba half and despite being hustled and badgered by the defender and being quickly closed down by an advancing goalkeeper, he held his shape to chip the ball over the keeper.

It was a goal that was like a feast to a multitude of starving people and was greeted with glee and excusable avarice by those who had sat for almost an hour and a half, their insatiable hunger for success reaching a critical point.

The goal was enough to push “Vincy Heat”, who despite losing the match 1-2, through on a 3-2 aggregate and a place in the next round of the Qualifiers where they would take on the likes of the United States, Trinidad and Tobago and Guatemala in Group C.

The top two teams from each of four groups will advance to the final round of World Cup qualifying.

From those six advancing to the final round, the top three automatically advance to the Russia World Cup, while the fourth enters a similar inter-continental playoff with the fifth placed team from the Asian confederation, which saw Trinidad and Tobago beat Bahrain to qualify for Germany in 2006.

That next round will begin on Nov. 3.

Earlier, the hometeam had stunned the Vincentians by going ahead in the 5th minute of play taken when Erik Danso capitalising on some loose play in their defence won the ball and easily beat Winslow McDowall in the SVG goal. The Vincentians, who mystifyingly according to the analysts, had changed up their formation and tactics going into the match, had a few opportunities to draw level but were either denied by some good work by the Aruba custodian or poor shooting.

Their success up to this point powered by their strikers, the visitors coaching then chose to use a solitary striker upfront and “sit and wait” for their opponents. This proved near catastrophic as allowed to come forward at will, the hometeam dominated most of the play.

The teams went into the break with Danso strike the difference.

It became even more problematic for “Vincy Heat” when Danso got his second as he once again benefited from some poor marking by the SVG defence to beat McDowall off the upright. The Vincentians with two goals down and staring the frightening prospects of elimination got a lifeline from Slater, who came through on the crest of a wave in the nick of time.

Reports say the strike was greeted by the loud sound of conch shells and the beating of utensils in the village of Clare Valley and tears flowed from the eyes of his mother, as the community hailed their own in a way that was appreciated by all.

One report said that his mother, when reminded of the regular “cut ass” she had put on him when he sought to play football after school, replied that she had “apologised to him” about that.

On Wednesday, when the team arrived at the E.T. Joshua Airport to a VIP treatment, Slater, bag on back, sought the quietude of a corner and away from the limelight — job completed.

President Venold Coombs, who addressed the players, promised incentives for the team as he had been giving since taking office just under four years ago.