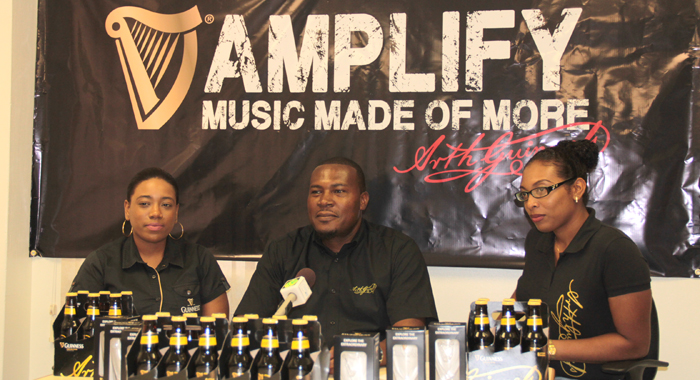 What was known as Arthur Guinness Day will this year be observed in St. Vincent and the Grenadines on Sept. 24 as “Guinness Amplify”, a grant concert featuring live performances and DJ music under the theme “Soca Meets Dancehall”.

“Amplify is not a celebration it is an experience that only Guinness could deliver to its audience,” Kelvin Franklyn, marketing coordinator at St. Vincent Brewery, bottlers of Guinness told the media.

He was, however, tight-lipped about the artistes who will perform at the event, but said auditions are being held around the country to select the disc jockeys who will be allowed to entertain patrons.

“Amplify, is about combining fresh, new and upcoming talent, with focus on disc jockeys and the best in soca and dancehall on one stage with one stout.

“Guinness Amplify will turn up the volume for emerging disc jockeys in St. Vincent and the Grenadines as we provide a platform for them to demonstrate that they are made of more,” Franklyn said.

Guinness Amplify auditions are being held across the country to select the DJs that will perform at the event.

“We are confident that this new platform of Guinness Amplify will connect the bold and fresh music talent in and around the region with the Vincentian audience, as well as providing them with some of the resources and expertise to showcase their talent in a way only Guinness drinkers would truly appreciate,” Franklyn told reporters.

He said Guinness Amplify aims to provide opportunities for emerging talents to perform in the top clubs in St. Vincent.

They will also get the chance to share a stage with some of the biggest names in soca and dancehall in the region.

The event will also show how diverse Guinness is as a brand and as stout and will bring a new experience to Guinness drinkers and Vincentians. “Unlike any other, Guinness has always found more ways to engage our consumer to enjoy their favoured stout and be rewarded at the same time.”

Three Guinness Harp crowns plus $10 you be redeemed for a Guinness Amplify Ticket at the Guinness Outlet in Kingstown.

Consumers could also pick up a Guinness six-pack from any of the participating supermarkets, bring the receipt to the Guinness Store and redeem a ticket for the event.

Guinness Amplify is a global event with diverse musical performances around the world, including Ireland, Indonesia, Malaysia, Spain, as well as the Caribbean.

“As Guinness launches a new Era, Amplify targets the younger Generation that love music, consume it with greater frequency, but in shorter bursts. They engage rapidly and seamlessly across the music ecosystem, opening up exciting spaces for the Guinness brand. Spaces that will fill music experiences you don’t just hear, but feel. Guinness Amplify will harness this and live in the music,” Franklyn said.