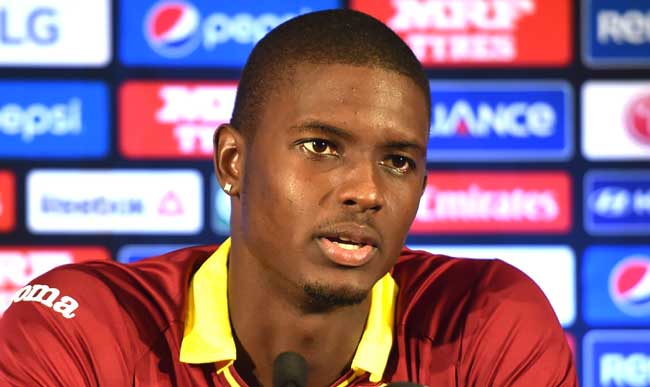 Jason Holder will be the new captain of the West Indies Test team. (Internet photo)

The WICB has announced that Jason Holder will be the new captain of the West Indies Test team. He replaces Denesh Ramdin.

The appointment was recommended by the WICB Selection Panel and endorsed unanimously by the directors during a teleconference meeting on Wednesday, a release from the board said.

However, former West Indies selector, Michael Findlay, is not in support of Holder’s appointment, citing his lack of experience and the current form of the West Indies team as his main concerns with the appointment.

Findlay said that he thinks the board may have erred in elevating Holder to the post of test captain in addition to him already being leader of the ODI squad.

“He is still a young man and may have the attributes of being a good leader but he is very inexperienced so to take him and put him in charge of the test team is putting a lot of pressure on the young man,” said Findlay, a former chairman of selectors.

“He is still in the early stages of his international career so he surely doesn’t have the experience there and in addition you are putting him to lead a team that is struggling and has been doing so for some time now. Those are significant factors which are going to determine how he fares.”

Holder, 23, has played eight Tests to date after making his debut against New Zealand last June in his homeland, Barbados.

Findlay said that while he doesn’t see Ramdhin as a good captain, it may have been in the team’s best interest for the WICB to have waited a bit before making the change.

The former test wicketkeeper and team manager said that Board will also have to look at appointing different captains for different formats so as to take the workload off the captain. He, however, said that if a player can command a place in each team in all the formats and is seen as a good leader, then there should be no major problem in the appointment being made, once the player, the selectors and the Board agree on this.

WICB chairman of selectors Clive Lloyd said Holder’s appointment was made with an eye to the future.

“He is a young man that all of the selectors, people in the Caribbean and worldwide believe has several of the qualities that can take our team forward,” Lloyd said.

“We felt the time was right for a change and we feel he will do as well as he did when he was elevated to the position of One-day International captain ahead of the World Cup.”

Lloyd added: “We had a number of detractors when he was appointed ODI captain, but he showed during the ODI series in South Africa and the World Cup that he had the qualities that were needed to take our team forward.

“We expect to get new thinking and new dynamism from him. Jason commands respect. He is a fine young man, very intelligent and he seems to get the best from the players because he is a straightforward guy. I think the players will warm to him. He has a young bunch of players and we feel he can guide them in the manner that is required for internationals.”

The removal of Ramdhin comes almost a year after his Trinidadian compatriot Dwayne Bravo was sacked as ODI captain following the aborted tour of India in which Bravo is said to have played a leading role.

Asked if the change in leadership could be a form of punishment, Findlay quickly dismissed this saying that all the players have been eligible for selection and therefore there is no disciplinary action apparently taken. He is of the opinion though that there should have been such action taken against the players who were at the time of the calling off of the tour were engaged in contract disagreement with the WICB and WIPA.

Lloyd said though he felt Holder had the ability to lead West Indies in all three formats, the selectors had no immediate intentions of making him Twenty20 captain right now.

“We do not want to any captain to lead in all three formats just now,” Lloyd said. “It would be quite burdensome on anyone. We think we can have a separate Twenty20 captain.”

Lloyd is said to have thanked Ramdin for leading the Test side and said the wicketkeeper/batsman was still had an important part to play in the success of the team.

“I have spoken to Denesh and he understood the situation and there was no animosity,” Lloyd said. “We just want him to perform a little bit better right now, particularly with the bat, and give of his best and support the new captain.”

Commenting on the announcement, WICB President Whycliffe “Dave” Cameron said: “The Directors discussed the recommendation put forward by the selectors. We have all seen Jason’s clear leadership potential and believe he can perform an excellent job for West Indies cricket over many years. We congratulate him on his appointment.

“We would like to thank Denesh for taking on the responsibility of leading the Test side over the last 15 months. He remains an integral part of West Indies cricket and will continue to have a vital role in our Test side.”