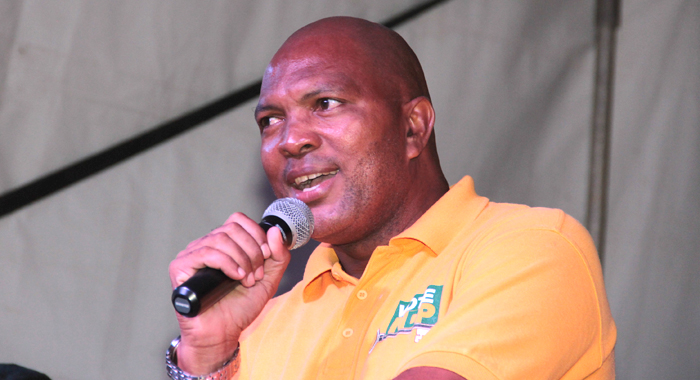 Stephenson, a member of the main opposition New Democratic Party (NDP), said an NDP administration would address the need of the constituency, and suggested that a modern sports facility will be constructed in Campden Park.

The opposition lawmaker, who is seeking a second term as area representative, said the ULP does not fare well between Lowmans Hill and Rillan Hill.

He said Prime Minister Ralph Gonsalves is, therefore, trying to fool residents of that bloc by saying he is looking to make Campden Park the nation’s seventh town.

“But what is this? Those of you who understand Campden Park, … It’s ‘Camtown’. Do we want Ralph Gonsalves to tell us that Campden Park is already a town?” Stephenson told a NDP rally in Campden Park recently.

He said that Gonsalves, citing the census, said that proposal is as result of a population explosion in that bloc.

But Stephenson questioned the census that Gonsalves was referring to, noting that the data is yet to be published.

In his speech, Stephenson walked constituents through the proposed seventh town, noting that the clinic in Campden Park is dilapidated.

“But why is it that way? It is simply because it is in Campden Park, it is in South Leeward, and they did not win this constituency, therefore, they totally neglected that area.”

Stephenson said that during the 2010 election campaign, the ULP’s candidate, David Browne, said the government would upgrade the clinic to include a doctor’s quarters.

“But … four years-plus after, we have not seen one spoonful of sand or stone in the facility up there.”

He said that when he took the government to task in Parliament, they said they never promised to improve the clinic.

Stephenson noted that the community centre, which was a hub for cultural activities and community events, has been without a roof for more than a decade after the roof collapsed.

“Ten years and counting, I have been going to Parliament asking questions: When are you going to restore the roof of that community centre.”

He said the last excuse he was given was that the government was working on a design.

Stephenson said he wants to see more facilities and more community centres available because the NDP has a plan to employ persons to teach young people a skill and the programmes will be conducted in community centres.

He said that while the government has said it has EC$800,000 for the upgrade of the playing fields in Campden Park and Chili, this is yet to be done.

Stephenson said rain began to fall when he was giving a speech at an event at the Campden Park playing field and the gathering ran under the pavilion for shelter.

“For what? Only to sit down there and get wet … because that facility, built by Jerry Scott and the NDP was, neglected by the Unity Labour Party.”

He said he was giving the people of South Leeward and Campden Park a solemn pledge, because he has been given the blessing of the NDP to upgrade one playing facility in every constituency.

“We are going to upgrade it to ensure that it is properly enclosed, that there are seating facilities, there are stands and there are changing room facilities as well. But not only that, those facilities will be properly lit so you can have your games played under floodlights,” said Stephenson, who is NDP spokesperson on sports.

He said the NDP has already given him the blessing to develop a state of the art playing field in Campden Park.

The former teacher and coach said the ULP has not kept its promise to build a national indoor facility.

“The Unity Labour Party promised much but delivered very little,” he said, adding that the NDP will construct an indoor sports facility.

“I am not just saying this idly, because I have already had talks with people who know what this facility is about, and believe it or not, people who played in the NBA … who have an interest in delivering.”

Stephenson said that Vincentian athletes in SVG cannot perform at the highest level because they do not have quality facilities.

“Therefore, within the first term of an NDP government, we will work relentlessly to ensure — we may not achieve the completion of that project, but I can assure you that that project will be significantly worked on to ensure that you can go out there and say something is going to be delivered.”

Stephenson promised constituents that an NDP administration will build river defences to protect homes along two streams in Campden Park.

He said Vermont, an agricultural community, is also a neglected part of the constituency, adding that gone are the days when the amount of eddoes produced in that community was second only to Costa Rica in Latin America and the Caribbean.

Stephenson said that most of the farmland in Vermont is growing grass.

“Is this a government that cares about the lives of the people of Vermont?

“Is this a government that cares that these people’s natural way of life is farming?”

He said that when the Buccament Bay Resort project was being developed, the government said they were moving away from agriculture to a service-based economy.

“We should not be surprised that they have systematically set out to destroy agriculture and cause the farmers who used to be independent and so proud because they were making their own dollar to depend on them.