‘I am no result of any political accident’ — Jimmy Prince 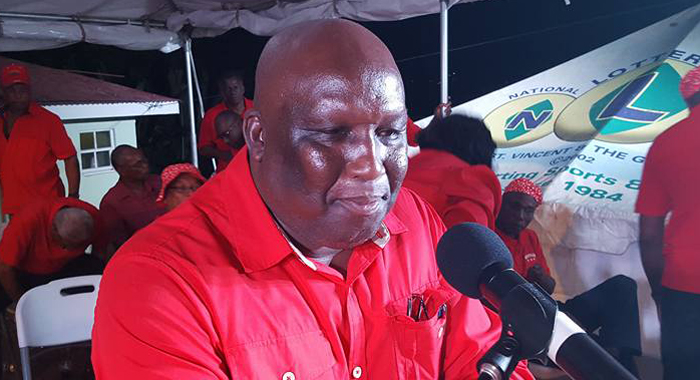 St. Clair Jimmy Prince, the ruling Unity Labour Party’s (ULP) candidate for Marriaqua, has spoken about his involvement in community organisation in the district, adding that he is no fly-by-night candidate.

Prince, a first-time candidate, told party supporters in Richland Park Sunday night that he does not normally speak about himself, but has been told that in politics it is important to say who you are, where you are coming from and where you are going.

He said he has lived in several areas of the constituency. “This valley is my valley. I come out of this valley and I aim to give back to this valley,” he said.

He said that after leaving school, he taught at St. Joseph’s Convent Kingstown before joining the former Government Information Service (GIS) as an information office.

Prince worked his way up in the state-owned media entity, retiring as director of the Agency for Public Information, the re-branded GIS.

He told the rally that he would not say much about his professional life since it is his “other life” that qualifies him to run for public office.

Speaking partly from a prepared script, Prince said that he learnt early from his grandparents that people have to work together to get what you want.

Hence, from an early age, he was involved in the establishment of groups in the community.

Among these groups, he mentioned the Marriaqua Anglican Youth Movement, membership of which he offered to persons outside the Anglican community, which the priest opposed.

He said he was also a founder member of Marriaqua Development Association and was involved in the restructuring of the Marriaqua Co-Operative Friendly Society (“Bunpan”).

“Comrades, I have mentioned those above to underscore my involvement in the social life of this constituency over the years.”

He said he also got involved in national life, spending almost a decade as an executive member of the National Youth Council.

“I’ve said all of that to say that mine is not a fly-by-night candidacy. I am no result of any political accident. I served voluntarily in this community almost all my life, and I will continue to do so with your help,” Prince said.

Prince was chosen over accountant Kirk Da Silva to be the ULP’s standard-bearer in Marriaqua in the next general elections, expected by year-end.

He replaces as candidate Deputy Prime Minster and Minister of Education, Girlyn Miguel, who has been representing the constituency since 1998.

He will come up against Curtis Bowman, the candidate for the main opposition New Democratic Party, who is making his second attempt at capturing the seat.