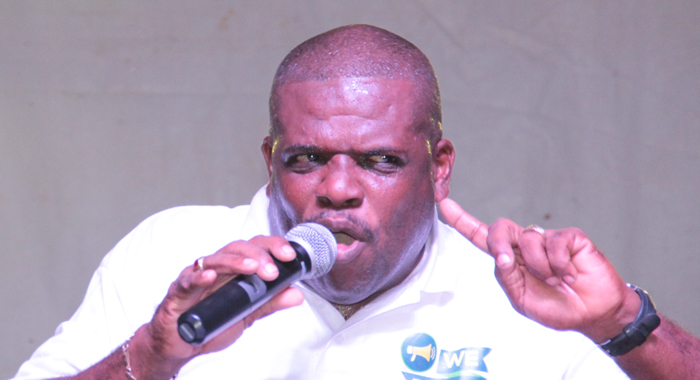 MP for North Leeward, Roland “Patel” Matthews, an opposition lawmaker, has described as a “comess extravaganza” the campaign rally that the ruling Unity Labour Party held in Chateaubelair in late August.

“They lied on me about my contribution to the people of North Leeward during the 2013 flood. I spoke the truth, I walked the walk and I have done the talk,” Mathews told a rally on his New Democratic Party (NDP) in Chateaubelair on Saturday.

Photos of Matthews assisting after the December 2013 floods and landslides flashed on the big screens at the playing field as he addressed the rally.

“But let me tell you something: I called him out. I let the people of North Leeward know who was coming to represent them. I said to them you have committed an act and the people must know about it. You get vex and you say you want to sue me. Well I want to say to you now, you could bring your lawsuit, you could bring your old talk,” he said in reference to his contender, Carlos James, of the Ruling Unity Labour Party as Matthews instructed the DJ to play Bob Marley’s “Bad Card”.

Matthews announced a few weeks ago that James has a criminal record, a reference to an EC$100 fine imposed on him about 12 years ago when he pleaded guilty to using indecent language during a fracas with a police officer, which resulted in several charges, all but one of which were dismissed.

James’ criminal record has been expunged as a result of a law passed in 2009.

Matthews, who is seeking a second term as MP, said he is a product of the constituency, noting that he was born in North Leeward, went to the Chateaubelair Primary School and the Petit Bordel Secondary School.

“I man born ya! I am the only candidate in this election to say that. And I repeat, I man born ya,” he said as he instructed the DJ to play King Short Shirt’s “Nobody Go Run Me”.

He accused the ULP of abandoning North Leeward after it lost the seat in the 2010 general election, and remembering it again in December 2013 when floods and landslides claimed the lives of five constituents and resulted in extensive damage to public infrastructure.

“We had to lose lives, we had to give a sacrifice in blood. That is when they realised that they love you,” Matthews said.

He said the government then came and wanted to give the impression that they were doing constituents a favour, “as if they had never seen mattresses, fridges and stoves”.

He was referring to the stoves, fridges and mattresses that the government distributed, courtesy Digicel, after the natural disaster.

“But I have news for them. During the 1980s and the 1990s, the New Democratic Party created a living standard for North Leeward people so we knew what stove was, we knew what refrigerator was and we knew what mattress was.