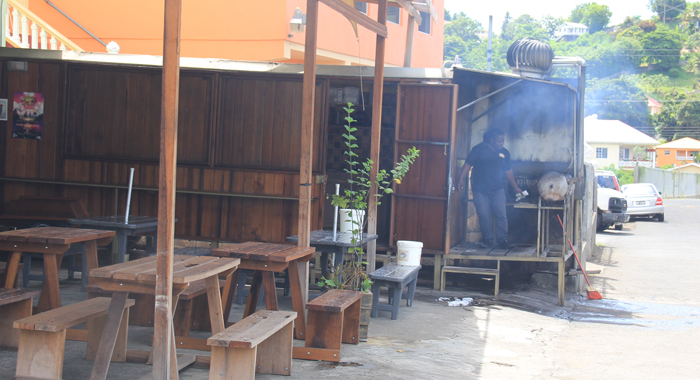 A man fires up barbeque pits in Arnos Vale on Wednesday. Residents have complained about noise and smoke in the area. (IWN photo)

Head of the Democratic Republican Party (DRP), Anesia Baptiste, says that some businesses in Arnos Vale are being allowed to violate the rights of residents of the suburban area because their owners are connected to the government.

“… I know there are residents who are very concerned about the ways in which, it seems, some businesses, because of connections to certain people in government, seem to have been allowed to break the law and trample upon their rights and freedoms when it comes to issues like breaching the principles in the Noise Act and even participating in certain business activities which affect the very health and welfare of the people.”

Baptiste made the point while addressing a DRP rally in Arnos Vale last week.

Some residents of Arnos Vale have complained about noise emanating from watering holes, and smoke from barbeque pits along the stretch between the roundabout and the entrance to the Sports Complex in Arnos Vale.

Prime Minister Ralph Gonsalves has noted that the area — traditionally a residential district — is becoming increasingly commercial and has noted a need for balance but has not elaborated on what his Unity Labour Party government plans to do to address the situation.

Speaking at the rally, Baptiste said:

“I know there are residents who are concerned about these things and I have investigated and I have found that there is too much lackadaisical attitude towards people breaking the law. It is as if there is one law for the politicians and his friends and his relatives and another law for the common man…

“With the DRP, it would not be so,” Baptiste told the DRP rally, which was attended by a handful of persons.

“If they break the law, let the police deal with them, regardless of who they are…

“So I will address those things that are not being addressed today,” she said.

Baptiste said that she will not tolerate wrongdoing by members of her government either.

“We were put here to serve you, not to trample on you, and you can be assured, I will not allow it to happen. And if it happens outside of my knowledge, I will deal with it and I will give you, the people, accountability, because you deserve it. We work for you, not the other way around,” she said.

The DRP, a fledgling party, has so far announced three candidates for the upcoming general elections, expected before year-end.

Baptiste, for the first-time, will contend the West St. George seat against the incumbent Cecil “Ces” McKie of the ULP, and political newcomer Julian “Jules” Ferdinand of the main opposition New Democratic Party (NDP).

And in East Kingstown, Karima Parris of the DRP is running against Leader of the Opposition, Arnhim Eustace, and Luke Browne of the ULP.

Political observers say the DRP is unlikely to have any impact on the outcome of the polls, which they say will be a straight fight between the NDP and ULP.