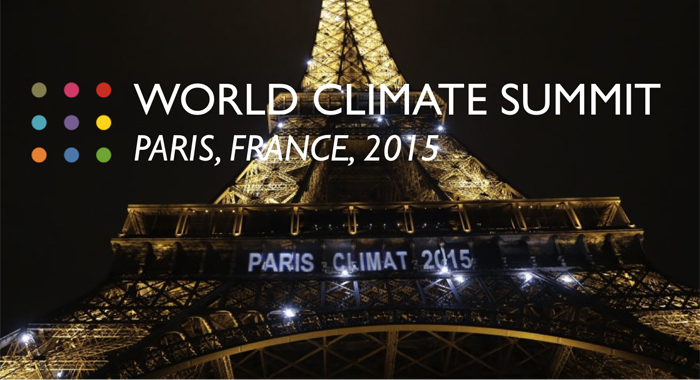 St. Vincent and the Grenadines (SVG) will send a senior minister and other officials to the world climate change conference in Paris in December, an indication of the seriousness with which the country is taking this year’s negotiations.

Negotiators from over 190 countries will meet in Paris for the 21st Conference of Parties (COP 21) to the United Nations Framework Convention on Climate Change.

For the first time in over 20 years of UN negotiations, COP 21 aims to achieve a legally binding and universal agreement on climate, with the aim of keeping global warming below 2°C of pre-industrialisation levels.

Small Island Development States, including those in the Caribbean, say the new climate deal must agree to keep global temperature rise less than 2 degrees Celsius higher than they were before industrialisation.

Anything higher than that will see SIDS continue to be buffeted by extreme weather events such as floods, droughts, and crop failure that have been having catastrophic events on their populations and economies.

SVG has been criticised for not sending negotiators to recent climate change negotiations, where CARICOM negotiates as a bloc as part of the Alliance of Small Island States (AOSIS)

“It hasn’t been finalised, but we will have at least a senior minister present there and officials,” Prime Minister, Ralph Gonsalves told a press conference on Monday.

“One of the things we are doing is working within the frame of CARICOM and the OECS,” he said.

Gonsalves notes that St. Lucia’s minister of Science and Technology, Sen. James Fletcher, has been at the forefront of the climate change negotiations on behalf of the Organisation of Eastern Caribbean States.

“Not every prime minister needs to go, but whoever number of prime ministers or presidents from the Caribbean go, they are going with a CARICOM position,” Gonsalves said, noting that this is the case in several international fora.

“If somebody says that he or she is speaking on behalf of CARICOM, people know this is 14 independent member states you are speaking on behalf of. You don’t have to have 14 leaders go and say essentially the same thing and sometimes, when they want to go and say something new and different, they end up saying things of cross purposes,” he said.

Gonsalves told reporters that climate change is an existential issue for SVG and SIDS, noting that over the last 56 years there has been extensive coastline erosion in SVG.

“We, in St. Vincent and the Grenadines, we are losing our shorelines. This is so on the eastern side of the island — that is the Atlantic side, but also the Caribbean side,” he said.

“If you see the maps, what the situation was in 1950, … and the loss of land, it is just huge,” he said, adding that the loss of land since 1950 in Georgetown is two lengths of a cricket pitch.

“It is serious businesses,” he said, adding that river and sea defence and forest management is important.

“I have to take money, which I can use somewhere else, to deal with adaptation and mitigation to climate change,” said Gonsalves, who is also Minister of Finance.

“We have been doing a lot of work in this area but this is not work which we can do alone. We have to do it with the small island developing states, and we have to do it with countries throughout the world, and this is why COP 21 in Paris is so important,” he said.

“Given the rise in temperatures, the rise in sea levels, the frequency and intensity of storms, the alternation of lots of rainfall and drought, this affects people’s livelihoods and particularly the poor and the vulnerable and the marginalised,” he told reporters.