‘ULP has transformed our infirmities into opportunities — Saboto 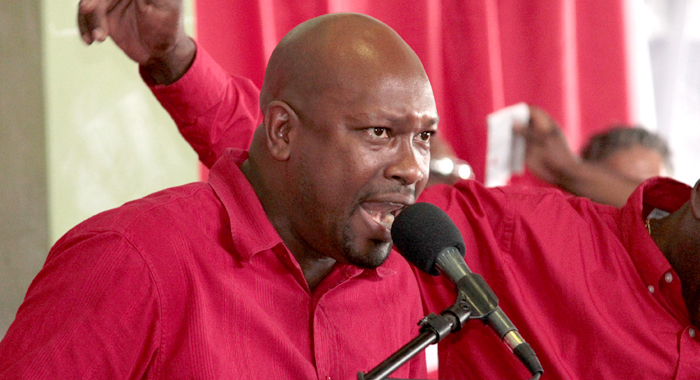 Member of Parliament for South Central Windward, Saboto Caesar, has appealed to constituents to stay loyal to the ruling Unity Labour Party (ULP), saying that it has transformed the district since coming to office in 2001.

Caesar, who is also Minister of Agriculture, told a rally in Diamonds on Sunday that the “handwriting of Labour and Labour love” is all over the constituency.

He said that, under the ULP, the district has moved from having  a large community centre room to a learning resource centre with a computer lab.

It now has a farmers’ market, and the “small rundown clinics” in Lowmans and Greiggs have been replaced by clinics that can house doctors’ quarters

South Central Windward has also moved from having “ball grounds” to playing fields that have been hosting competitions every year since 2005.

Steel pan music was a rarity, but under the ULP administration, over 50 young persons learned to play the instrument every year, Caesar said.

“We must stay together because we still have more changes to continue and to complete.”

He said the constituency is experiencing the largest road repair programme in its history.

The constituency representative said he has spoken to VINLEC, the state-owned power company, and it is doing assessments to bring light to Chapmans.

“Comrades, don’t fall for the NDP propaganda asking what was done over the last five years,” said Caesar, who is seeking a second term as MP.

“And comrades, there are some of us who seem to be lending an ear to the NDP propaganda when they are talking, but don’t listen to them.”

He said hard courts are being repaired in the constituency, thereby creating employment for over 40 constituents.

Two constituents will soon move into houses built under the Lives to Live programme, under which the government builds houses and/or bathrooms and toilets for disabled, elderly or poor persons.

Saboto said that SVG has advanced and the constituency has moved forward significantly under the ULP.

He told constituents that as Jamaican reggae artiste Bunny Wailer said, they must “stand predominate” and understand what Martin Luther King Jr. meant by “the fierce urgency of now”.

He said that when the international airport at Argyle is complete, hundreds of job will open for the young people.

“Young people get ready,” Caesar said, adding that hundreds more jobs will be made available in the construction phase of the geothermal energy project.

Caesar, a lawyer, said there are already two doctors from Diamonds, adding that he wants more from the constituency, including the two from Lauders who have recently returned from studies.

“Medical doctors for South Central Windward, one doctor per village by 2020 is our goal,” he said, adding that the constituency is on track to meet that goal.

“I want to coin this phrase tonight: the ULP has transformed our infirmities into opportunities.”

Caesar, who is seeking a second term in office, said that his challenger, Addison “Bash” Thomas “is not and will not be a topic in this campaign

“Tell me how could a former teacher run for a party that does not support the education revolution? How can a teacher do that? We have no time to waste with losers. Bash is a qualified loser. A loser on the losing side in 2010 by over 500 votes,” said Caesar who told constituents that he will win by 700 votes in the next general elections, expected by year-end.

He told constituents to ensure that they are registered and speak to their relatives.

“I will knock on every heart and I will beat on every door and I will shout Labour. From Firebun to Maroon Hill, from Tululu Bayside to the foothills of Bon Homme in Greiggs, it’s Labour. Let us stay together, let us put on our red, and, as a comrade told me in Greiggs, when yo’ put on the red yo’ hurt up dem head,” Caesar said.

3 replies on “‘ULP has transformed our infirmities into opportunities — Saboto”