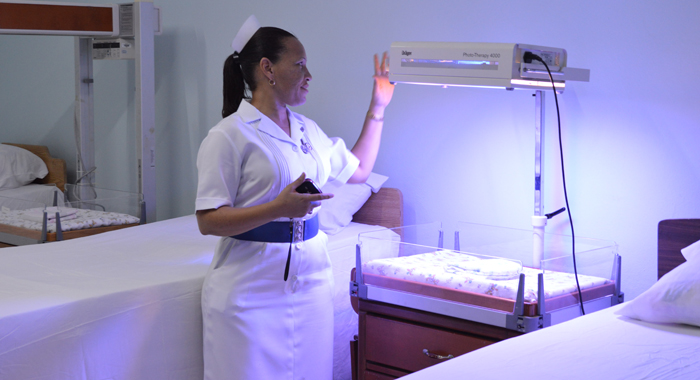 Mothers in the Northern Grenadines can now deliver their babies at the Bequia Hospital, upgraded through the CDB’s Basic Needs Trust Fund. In this photo, Nurse Hutchinson shows how the ultraviolet light in the maternity ward works.

On the northern Grenadine island of Bequia, if a pregnant woman goes into labour unexpectedly, sometimes her only option is to risk danger to herself and baby by traveling via speedboat to Kingstown, St. Vincent to deliver.

For many years, residents of Bequia and neighbouring Mustique could not depend on the hospital and clinic in Port Elizabeth to meet their primary health care needs.

Getting the most basic medical treatment was often associated with hardship, high costs and long delays between being diagnosed and receiving treatment.

On Thursday, that era ended for the island’s 5,389 men, women, girls and boys when the newly reconstructed Bequia Hospital was officially handed over to the Ministry of Health and the Environment and the community during a ceremony at the Port Elizabeth Health Complex.

The upgrade initiative was supported through funding of US$325,800 under the sixth cycle of the Caribbean Development Bank’s Basic Needs Trust Fund (BNTF), along with US$92,396 from the Government of St. Vincent and the Grenadines. The Port Elizabeth Clinic, also part of the complex and which was also funded under BNTF 6, was upgraded in 2013.

Representatives from the Government of St. Vincent and the Grenadines, CDB and the hospital attended the event. Minister of Health, Clayton Burgin, delivered feature remarks.

“Better access to health care saves lives, builds communities and strengthens economies. Our investment in the Port Elizabeth Health Complex is also — in many ways — an investment in the social and economic development of St. Vincent and the Grenadines,” said Darran Newman, portfolio manager, BNTF at CDB, who also delivered remarks at the handover and opening ceremony.

“This upgrade of the Port Elizabeth Health Complex improves the quality of health care and quality of life in the Northern Grenadines, and brings health services within the reach of the people on these islands,” she said.

Prior to the renovation and upgrade, Bequia Hospital was housed in a 50-year-old building and in a state of disrepair. The 12-bed facility had small wood-partitioned, poorly ventilated rooms and a building design that was inadequate for meeting the demands of the islands’ population. For more than two decades, the clinic was housed in a room originally intended for food storage, with no waiting area, which left patients exposed to the elements while awaiting its opening at the start of the day.

The upgraded hospital now has the capacity for 16 beds and enhanced amenities that will allow for an expanded range of curative and preventative health care services. With the new hospital and clinic, residents will no longer need to travel to St. Vincent often for treatment. In addition, the Port Elizabeth Health Complex will provide access to health education to meet the growing needs of the community.

Since 2003, BNTF has allocated grants of more than US$7.8 million to St. Vincent and the Grenadines. Several large infrastructure and educational sub-projects have been completed under the BNTF Country Project for the islands, including the construction of a number of schools and health centres. Under BNTF 6, CDB has invested more than USD2 million in the health sector in participating countries.

The BNTF Programme contributes to the reduction of poverty in targeted communities through the provision of basic infrastructure and livelihood enhancement services. BNTF funding is provided to support such interventions in 10 participating countries with Grant financing mainly from the Special Development Fund (Unified) of CDB and counterpart financing from participating Governments.