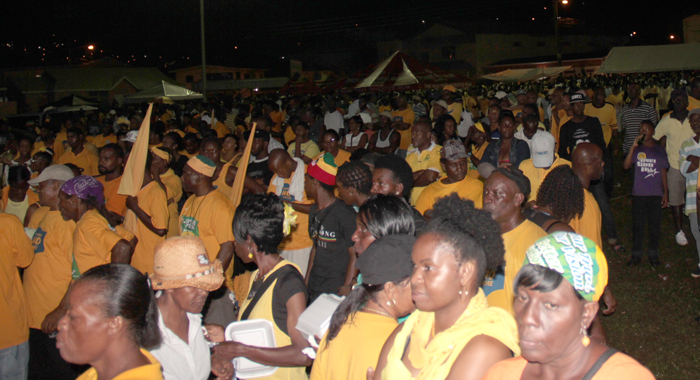 Persons at an NDP’s rally in Calliaqua in November 2015. (IWN photo)

The main opposition New Democratic Party (NDP) says it is ready to lead and will expand the Vincentian economy into new areas if elected to office.

General elections are widely expected by mid-December, ahead of the March 2016 constitutional deadline.

And NDP president, Leader of the Opposition Arnhim Eustace, told party supporters on the weekend that the party’s development projects, backed by foreign direct investment, “are on train to begin”.

Among these, he mentioned an EC$75 million state of the art hospital, which he said the party will build.

“We are determined … to expand the economy into new areas, particularly through the information technology while we bolster the traditional economy  —  reinvesting in agriculture,” Eustace told a rally in Calliaqua on Saturday during which the NDP unveiled its plans for improving healthcare in St. Vincent and the Grenadines.

“And we are determined to turn our backs on this long period of low growth in St. Vincent and the Grenadines and high debt,” he said.

Eustace told the gathering who braved intermittent showers at the event that the party’s slate of candidates are “proven leaders, hard workers” who will take the country “out of the red, and bring it into the light of economic revival.

“And we will do all of this by practicing a new brand of politics — where bad behaviour in office; where nepotism and corruption; waste, and insults, bombast; where personal irresponsibility will become a thing of the past,” he said.

He said the NDP is determined not just to build another society, “but a just society based on morality, transparency and meritocracy.

“And that is what this campaign is about,” he said.

“I am here to announce to the whole of St Vincent and the Grenadines that because of this party and these gentlemen, help is on the way.

“For the single mother, who does not know where the next meal is coming from to feed her children, help is on the way..

“For the banana farmer, who has been abandoned, we say: Hold on! Help is on the way.

For the young men and women who graduated from college more than six years ago in some cases, and still have not found any jobs. Hold on! Help is on the way.

“Our young people in IT; in arts; in culture. All you young people, who want to make your way, I say to you tonight, hold on, not long, help is on the way.”

Eustace said that, in the next few weeks,  as the NDP continues its campaign, he will explain and expound on the many plans the party has.

“But tonight, … we are focusing on one of the most crucial areas for any governmental endeavour — and that is healthcare.