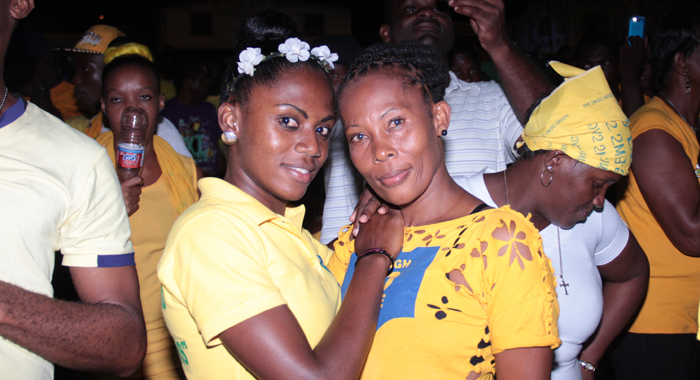 NDP supporters pose for I-Witness News at the rally in Calliaqua, where the party outlined its plans for healthcare on Saturday. (IWN photo)

The main opposition New Democratic Party (NDP) has outlined a three-pronged approach to national health care in St. Vincent and the Grenadines, the first of which is promoting wellness.

“The cost of health care could be cut drastically, if we work to ensure that our people do not get sick in the first place,” says NDP president, Leader of the Opposition Arnhim Eustace.

He told a rally in Calliaqua on the weekend, when the NDP outlined its policy on health and wellness, that a lot of the health challenges affecting persons in St. Vincent and the Grenadines are from lifestyle diseases such as obesity, diabetes and some types of cancer.

“An NDP government will move aggressively to implement a public policy that will promote healthy lifestyles and good nutrition through education and awareness.

“We shall also implement policies that will help boost organic production in agriculture… We will emphasize nutrition education in our schools, develop a system for community sports and recreation, among other areas.

“We will also develop a robust public health system that places emphasis on preventative medicine; and for a system of annual medical check-ups for all citizens to catch any potential problem early,” Eustace said.

He told party supporters that the remaining pillars of the NDP’s health care policy will kick in when people get sick.

“Too many times, our people get sick and we have to beg for donations, and hold fundraisers and depend on the generosity of others to ensure that they can access even basic medical attention,” he said.

He said a National Health Insurance scheme will be there to fund people’s medical needs.

He noted that in 2000, the NDP administration hired the University of the West Indies to develop a national health insurance plan for SVG.

When the NDP lost the March 2001 election to the Unity Labour Party, that plan was ready for implementation, Eustace said.

“This government has slept on that for the last 14 years while our people have struggled here to meet their most basic health needs,” he said.

“We are bringing it back in 2016,” he said, adding that because the NDP wants the proposed national health insurance programme to fund itself, it is recommending that 1 per cent of a person’s salary go to health insurance service.

“So that when you have your illnesses, you will have some fund coming in to help you meet the cost of drugs and so on,” Eustace said.

He said that, with time, the health insurance will become as large as the National Insurance Services.

Eustace said the NDP administration did not want the proposed health insurance service to be costly to operate and suggested that it has a shared board with the NIS, in addition to some medical professionals as directors.

“So, the work is already some. All we have to do is to update some of the information from 2001 and begin the implementation of our national health insurance scheme,” he said.

He told party supporters that no nation is worthy of its name if its government is unable or unwilling to take care of its people.

“What could be more fundamental to the role of a good Vincentian government than safeguarding the welfare of Vincentians?

“Our people must not suffer and die just because government has failed to invest in their health.

‘Health care has never been a priority for the ULP and people have suffered and died because of it.

This must change and it will change under the New Democratic Party. I do not have to stand here tonight to tell you of the terrible standard of our health care… Many of you have lived through the nightmare,” Eustace said.

He said  the “scourge of poverty” is the biggest killer of Vincentians.

“Poverty that prevents many Vincentians from being able to afford to eat daily and healthily,” he said.