‘Ask Ralph’ will be relevant even if I die now — Gonsalves 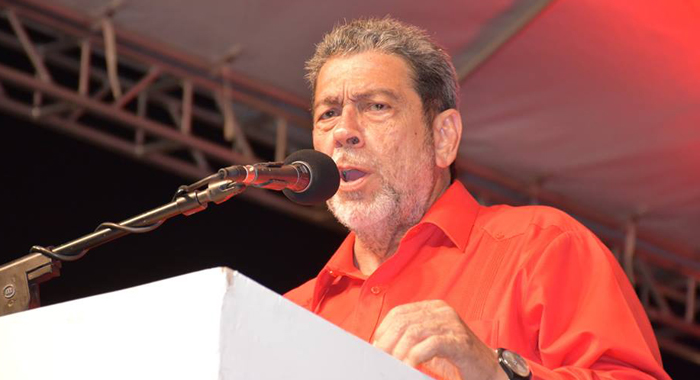 Prime Minister Ralph Gonsalves says that the ruling Unity Labour Party’s (ULP) campaign slogan “Ask Ralph” will be relevant even if he dies, as he has documented the party’s plans and policies.

“Ask Ralph”, a perversion of the shortened version of an answer that Leader of the Opposition, Arnhim Eustace gave to a questioner at a town hall meeting in New York this year, has become a popular ULP mantra during the campaign for the Dec. 9 general elections.

Asked about his 10-15 year plan for the country, Eustace told the questioner “Ask Ralph for his”.

Gonsalves, speaking at the ULP rally in Arnos Vale on Saturday said he had heard some people ask what would happen if he drops dead.

“But yo’ see, Ralph has the plan written down, so even if Ralph is not here, if Ralph, as I am speaking to you now is cut down and I am taken with my ancestors and placed in the earth in my village, the plan remains, because the plan is written down and the spirit with which this plan has been put in place, it will be carried out by all the members of the Unity Labour Party and you will ensure that this plan is carried out,” Gonsalves said.

He said the ULP’s plans for the country are written in the “St. Vincent and the Grenadines National Economic and Social Development Plan: 2013-2025”, which was launched two years ago and is available online.

The party’s plan for the next five years is in their manifesto, which is with the printers, Gonsalves said.

The NDP launched its manifesto online last week and has said that it will distribute 10,000 hard copies next week.

The unabridged ULP manifesto will be published online, Gonsalves said.

“We are putting this manifesto, the full unabridged manifesto on the website, but because it’s a big document, we are putting an abridged version in print, which you can hold in your hands so you can see what the essence of our plans are, which we are committed to carry out over the next five years,” he said.

He told party supporters that the NDP will also launch a youth manifesto, which is also with the printers.

“This is what has the health plan. You hear me? You want to see the specific education plan? This is the education sector development plan St. Vincent and the Grenadines 2014 to 2019,” he said, and he held up the document.

“You want to know the plan for us to have zero hunger and nobody in this country by 2020, so long as we are in office, will go to bed at night hungry. The plan to make that happen … is here in the zero-hunger plan,” the Prime Minister further said.

He also spoke of a plan for the development of ports, namely to move the cruise ship pier from Kingstown to Arnos Vale.

“And if you want to see what the experts have done, this is not Farmville what I am going to show you here,” he said, repeating the allegation that the NDP copied, from the internet, the design for a proposed modern hospital, an allegation that the party has roundly rejected.

“This is what the experts have drawn to show the layout of what in front here will look like after yo’ put the Unity Labour Party back in power…” Gonsalves said.

He noted that the back of the ULP’s campaign t-shirts is emblazoned with the slogan “Ask Ralph/the man with the plan”, while the front says “Labour Love”.

“You understand when I tell you that even if at the very moment that I am speaking to you that the good lord decided to take me home to my ancestors that the plans that we have in place will continue and they will still have to ‘Ask Ralph’ even though I may not be alive.

“Because, the plans, I have written them to be carried out by those who have worked with me on it, the comrades who are here on the platform of the Unity Labour Party,” Gonsalves said.

The ULP, which has a one-seat majority in Parliament, is seeking a fourth consecutive term in office.

The main opposition New Democratic Party, which holds seven of the 15 parliamentary seats, is expected to present the biggest challenge to the ULP in the election, which political observers say are too close to call.