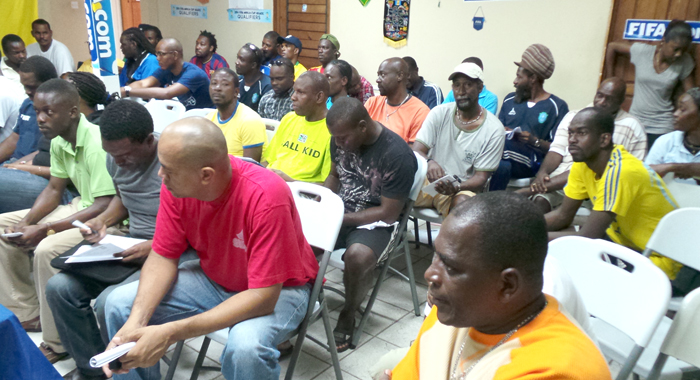 A file photo of an SVGFF meeting.

One of the most anticipated annual meetings of the St. Vincent and the Grenadines Football Federation (SVGFF) takes place today (Saturday) at the Media Centre at the Arnos Vale Sports Complex, where Venold Coombs will vie for a second term as head of football in the country.

The high point of the meeting is expected to be the election of officers to fill the four positions as president and vice-presidents.

A release from the SVGFF indicated that there are 15 nominees by affiliates to fill the positions.

One observer who once served on the SVGFF opined that the reason why so many people are now offering themselves to serve in most cases “is not so much the love of sport and country, but the allure of ‘free money’ (stipend) and a chance to travel, dine and wine in class”.

Since 2007, executive members are now paid a monthly stipend, with the president getting EC$1,800 and each of the three vice presidents receiving EC$1,200. The four committee members get EC$800 each monthly. Executive members also have the opportunity to travel overseas to FIFA, CONCACAF and CFU congresses as well as other meetings and workshops.

Members are given per diem ranging from US$100 to US$500 on some of these trips.

“In my time as an executive member you were lucky if you went to one of the other islands as a team manager, because most of the time we had to beg for the passages to get the team to the Windwards tournament and you had to find your own pocket money,” said a former administrator, who requested anonymity.

He pointed out that he has no problem with people being paid a stipend as the time put in at meetings and local travel are done at great sacrifice by individuals, but believes that the earning of a stipend must never be the main reason for volunteering to serve.

In today’s meeting, the post of president will be a straight fight between the incumbent, Venold Coombs, and former Scotiabank employee and shipping manager, Roddy Dowers.

The 1st Vice President position sees a slate of five in contention to fill the position, which was vacant in the current executive since the departure of holder Lloyd Small.

The loquacious Small resigned citing a number of problems with the operations of the executive, but was never officially replaced.

The five contesting this all important position, which is seen as a standby president, are Osborne Bowens, an educator; Keith Duncan, a public servant; Wayne Grant, a police officer; Kendale Mercury, a football coach; and, Otashie Spring, an accountant.

The position of second vice-president will see another five candidates testing the conscience of the affiliates in an effort to be elevated to manage the affairs of the country’s most followed sport.

The 3rd Vice President position will be contested by the incumbent, Elroy Boucher, educator and football coach Wayde Jackson, and IT specialist, Bevan Lewis.

The vice presidents will have responsibility for technical matters, tournaments and fixtures and finance, as per the Federation’s constitution.

Indications are that Coombs, seen by many as possibly the most productive president of the SVGFF, should come out victor by some margin over Dowers.

Speaking to the media this week, Coombs outlined the progress of the sport under his four-year tenure.

“I have, without a doubt, been the most successful football president in this country. Look at what we have achieved. Men’s champions, women’s champions at Windwards football, the Under-23 advancing to the semi-final stage of the CONCACAF Olympic Qualifiers, the expansion of the grassroots programme, more teams taking part in regional and international competitions and we have a bus of our own and we are now looking for a home for football,” said Coombs who was responsible for taking the country into FIFA in 1988.

He said millions of dollars have passed through the office and more is to come and therefore requires persons who are honest and responsible to take charge of such monies.

The president said he will be running with a slate comprising Fraser, Jackson and Spring but will be glad to work with whoever the affiliates elect.

“It is a democracy and I will work with anyone,” he said in response to a question about what would be his position if members of his slate are not elected.