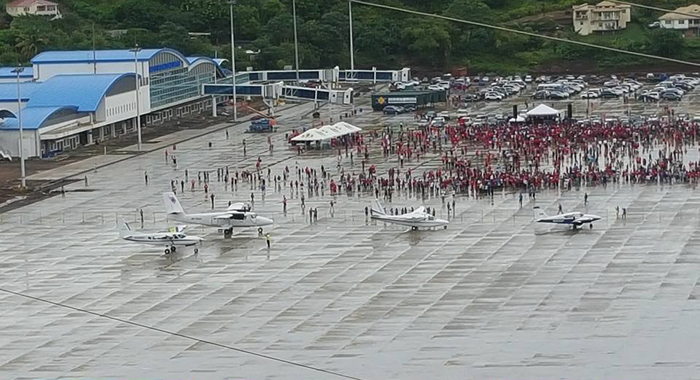 Vincentians could see a LIAT aircraft landing at the incomplete Argyle International Airport before general elections on Dec. 9 if the opposition raises doubts that larger aircraft can land at the airport.

“You know, if they raise any further noise about what we have done here today and if they say that ah can’t land a LIAT plane here, before December the 9th ah might bring a LIAT plane and land it right here,” Prime Minister Ralph Gonsalves told a ceremony at Argyle International Airport where four small planes landed as part of regulatory testing of the visual aids at the airport.

“You hear me? You hear me? So let them — I’m just telling them watch their mouth; be careful! Be careful! Of course, they are a very reckless and desperate group and they may say that. And I hope the press report accurately what I am saying here,” he told the gathering which included many persons wearing Unity Labour Party campaign t-shirts and carrying campaign flags.

Gonsalves, who has ministerial responsibilities for civil aviation and is chair of LIAT’s shareholders governments, told the gathering that the runway at Argyle, while incomplete, is longer than E.T. Joshua the nation’s main airport.

“I tell you this, right where this airport is at the moment, the distance which has been paved is just over 6,000 feet. We are going to 9,000 feet,” he said.

He said there were some problems with some equipment and aggregates, which have been resolved and work is moving “fast pace ahead”.

“And very shortly we are going to be able to land the 747 jets,” he said to cheers.

“And if they doubt me, just like how they doubted that any plane could land here, especially the small planes, and you see how — look, the ride I came in on today, the regulatory plane up front, the ride was very smooth.

“You know they had to make several circles for their testing and the landing was very, very smooth and everyone would tell you that. As [pilot] Mr. [Jonathan] Palmer said, the landing was routine. Routine. I say a piece of cake, he says he is a professional, he says routine,” the Prime Minister said.

LIAT is owned by the governments of Antigua and Barbuda, Barbados and St. Vincent and the Grenadines with a combined shareholding of 90 per cent between them. The remaining 10 per cent is owned by other regional governments and minority shareholders.

The regional carrier’s fleet is composed of ATR 42-600 and ATR 72-600 twin-turboprop aircraft.