FEATURE: Making the most of the dasheen plant in St. Vincent 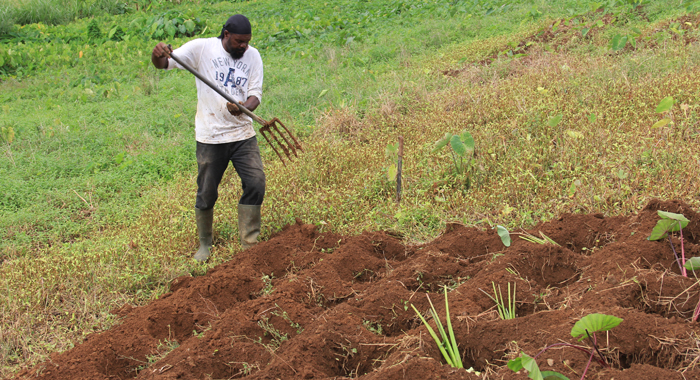 “St. Vincent is really dasheen country. There is no doubt about that,” the Vanuatu islander shouted from the front seat of a minivan as he participated in a “learning journey” to this east Caribbean nation.

Calo comes from a region where dasheen is a main staple and was among farmers, agro-processors and journalists, from the Pacific and other Caribbean countries who come here to observe the cultivation of dasheen in a country that is one of the leading producers of the tuber in the region.

The exercise which also took the team to Jamaica was part of the one-week Caribbean-Pacific Agro-Food Forum held in Barbados earlier this month organised by the Netherlands-based Technical Centre for Agricultural and Rural Cooperation (CTA), an European Union agency whose work focuses on African, Caribbean and Pacific (ACP) countries.

In St. Vincent, the learning journey looked at the production of dasheen (taro), the main crop on a farm run by Gwendolyn Cottoy, who has been farming in Francois, a community of Marriaqua and considered the island’s “bread basket”.

She grows several varieties of dasheen, including experimentation varieties imported from the Pacific that are being tested for geographic adaptation and palatability among local consumers. Farmers now prepare the land by digging holes, instead of furrows, as had traditionally been the practice.

“Banking (digging furrows) takes too much time, so, therefore, we rather do it this way (dig holes),” she told the visiting delegation.

“When you dig with the fork, you get a better result. It’s bigger and it (the tuber) gets more space to expand inside the hole,” the mother of three, said.

Dasheen is a viable crop, Cottoy tells the delegation, adding “everybody is doing it …to make money”.

She sells the dasheen tubers to the Eastern Caribbean Trading Agriculture and Development Organisation, Winfresh, and itinerant traders, known locally as “traffickers”, who sell agricultural produce in other Caribbean countries.

“As a business person, I see agriculture as something meaningful to me, something I want to expand,” says Cottoy, whose farm holding totals seven acres.

“That (agriculture) helped me to upgrade my children and myself on a whole. I think agriculture is something worthwhile doing.”

In addition to the weather, dasheen farmers wrestle with the high price of agricultural inputs, a reality known too well to Dennison Samuel, a farmer in Richland Park, another Marriaqua community, who has diversified around the banana fruit, once dubbed “green gold”.

“The area that we are in, agriculture, is a ticklish area, where, for the last eight years or so, we have experienced different things, for example, climate change. Our terrain has changed drastically,” Samuel told the Caribbean Media Corporation (CMC).

“Also, in terms of nourishment for the plant, there are difficulties, most times in getting those things. Different from that, there is high cost that affects us and with high cost, you get low production.

“But, because of family commitments, and there are no other alternatives, you stick within just to make ends meet,” he said, adding that there is a need to do agriculture differently.

“We have to be serious with something that we have to survive by every day. I say that to say for our food security in the Caribbean we have to look at that seriously and things we have to do to maintain that at a certain level.”

Cottoy agrees, saying that the government should look into the situation and do more for farmers.

“At the end of the day, farmers are losing instead of gaining. You keep working, working for nothing,” she adds.

But things are looking up. At the Caribbean Agricultural Research and Development Institute (CARDI) Crop Research Centre in Rabacca, north of here, Ruthvin Harper, a crop research officer at the Ministry of Agriculture, says  agriculture officials are evaluating 25 varieties of dasheen imported from the Pacific.

The dasheen are being cultivated under an International Network for Edible Aroids (INEA) initiative where the objective is to determine which varieties adapt better to local climatic conditions.

Harper tells CMC “when we are done, we will do what is called a taste test then a comparative look between production versus taste, which would lead to acceptability”

After the taste test and acceptability analysis, agriculture officials will select three varieties, which will be crossed with two local varieties.

“We will be doing crossing using the flowers, and from there, we will develop new hybrids, which would then be transplanted and the same production test and palatability test will be done for acceptance in the market,” he adds.

St. Lucian farmer Mark Remy, who grows mainly vegetables and potatoes in Choiseul, along St. Lucia’s south west coast, is impressed by what he has seen here.

“First of all, I observe that St. Vincent does quite a large amount of dasheen on a much larger scale than St. Lucia,” he said, noting that in St. Vincent, there is minimum tillage because of the texture of the soil, compared to St. Lucia, where there is more clay loam.

“Here, simply because of the fine soil structure, the Vincentian farmers, after they use a weedicide, they go straight ahead and plant the dasheen,” he said, but suggested that, as in St. Lucia, Vincentian farmers can use tractors for ploughing on flatter lands.

“When I go back home, I will do is do some more research in dasheen cultivation; share with our farmers back home the experience back here.  We also have to seriously look at our marketing because there is a bigger market in St. Lucia for dasheen,” he tells CMC, noting the island’s larger population and tourism sector.

“We have a hotel that operates a dasheen restaurant, where they are sampling the dasheen in different presentations to the guests and that’s one thing we need to do more in St. Lucia.”

Businessman Raimond Tulensru, from Kosrae, an island in Federated States of Micronesia, was moved by the size of the dasheen farms in St. Vincent.

“We are planting it on the swampy area. We don’t plant it on dry land,” he, however, said of the dasheen, adding, “our farms are not this long, not this wide.”

Dasheen is also a viable crop in Micronesia, where a plot generates between 500-600 pounds, which is sold at one US dollar a pound.

Tulensru is not a farmer, but owns an agro-processing business that produces dasheen flour.

In early December, he will receive a delegation from the European Union who will examine the business for certification for export to the bloc.

“I wanna be like one of these farmers, copy them. I am really impressed by what they are doing here. It is really a challenge to me. I will go back and try,” he tells CMC.