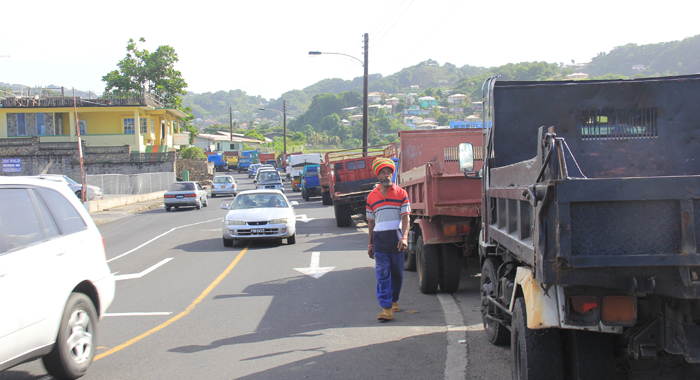 Trucks lined up outside the government’s building material storage facility in Arnos Vale last week. The NDP says some of its supporters have been denied assistance. (IWN photo)

The ruling Unity Labour Party is being accused of using state resources to give itself an unfair advantage in the Dec. 9 general election.

Chair of the main opposition New Democratic Party (NDP), Sen. Linton Lewis, levelled the accusation as the NDP, the ULP and the Democratic Republican Party signed a code of conduct to govern the election campaign.

Addressing the ceremony, Lewis cited that Principle 22 of the Code, which states, “Each Party shall have equal free time on the National Broadcasting Corporation. The principle of equality shall also hold for other electronic media, insofar as free access is concerned”.

He said it was unprecedented in the history of the country that there is such an unfair and unjustified involvement with respect to NBC in coverage of NDP political meetings, conference, and statements.

“We have not seen that sort of equality and fairness. We don’t want to have these provisions here and we don’t follow through,” Lewis said.

He told the ceremony that he was not saying that there have been directives by the government to carry out these “unfair attitudes and approaches”.

He, however, said that if certain persons in authority have the slightest feeling that “discriminating, victimising and being vindictive” will be accepted by the government, “then, understandably, they will do so with impunity”.

Lewis said there are examples, even recently, of persons being removed from roadwork and were told that they ought not to work because they support the NDP.

The previous night before the singing of the Code, a young lady was told that she could not get any building material because she supports the NDP, Lewis said.

“And that, to my mind, is wrong and I think number 12 of this code of ethics actually speaks to that. It creates an unfair advantage,” he said.

Principle 12 says, “12. Candidates will not permit the use and abuse of State resources for political campaigns”.

Prime Minister Ralph Gonsalves, who signed on behalf of the ULP, said he would respond on the campaign trail to some of Lewis’ statements, but did not indicate if he would respond to these specific allegations.