‘I have nearly 6,000 persons on Public Assistance’ — Gonsalves 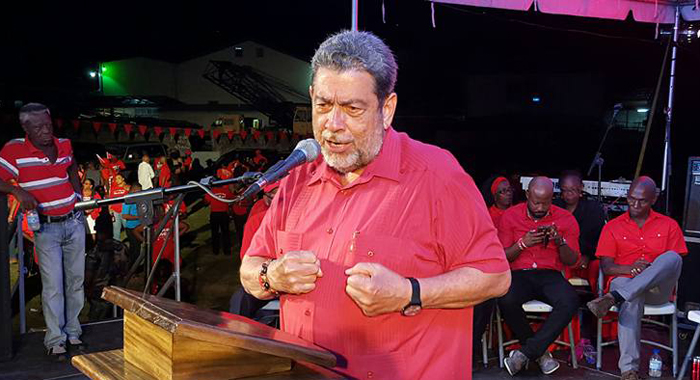 Almost 6,000 persons, or nearly 6 per cent of the population of St. Vincent and the Grenadines, receive public assistance, money given to poor persons monthly, commonly referred to as “poor relief”.

“This year, we are spending nearly 18 million dollars on public assistance … I have nearly 6,000 persons on Public Assistance,” Prime Minister Ralph Gonsalves said Saturday night at the launch of the online version of his Unity Labour Party’s election manifesto.

Gonsalves quoted the figure as he outlined social programmes that he claimed Leader of the Opposition Arnhim Eustace will cut if the main opposition New Democratic Party (NDP) is elected to office.

“He (Eustace) said that is too much money,” Gonsalves said in reference to the EC$18 million spent annually on Public Assistance.

“Well, if you want to cut public assistance for the poor or children of the poor, you would come and tell me you could win election in St. Vincent and the Grenadines in the year 2015?” Gonsalves said.

“Listen to me, listen to me. It is easy to cut it by half you know. You know why it reached that figure? Two reasons: first of all, the population of the elderly has increased and many of them didn’t work enough before to get the NIS contributions and because of universal secondary education, a lot of poor persons’ children had to go to secondary school and I need to help them to go to secondary school, so I have to give them some public assistance. That’s why the number is almost 6,000,” said Gonsalves, who is also Minister of Finance.

He said that NDP candidate for West St. George, Julian “Jules” Ferdinand, said in a video   advertisement that the NDP is not about giving citizens public assistance.

“Well, for heaven’s sake, Mr. Ferdinand could be comfortable and talk like that in his house, with his retirement benefit from ECGC — and I am not envious of him for all his wealth, for all his comfort, I am happy for him and all his family.

“But why, if you are so comfortable, you would want to deny a minimum comfort to the poor and the working people and the children so they could get a little public assistance?

“And come January, I am going to increase it by a further $25, which would cost a further $1.5 million more.

“Rather than cut it, I am going to increase it because everyone tells us who studies our economy and we say so, that we are going to have modest economic growth and the poor must get something out of the growth,” Gonsalves said.

Speaking at an NDP rally in Bequia Saturday night, Eustace said that his party is not interested in reducing the Public assistance roll for the sake of doing so.

He, however, said that an NDP administration will focus on creating jobs and thereby reducing the need for persons to receive hand-outs from the state.

“There are several people in this country who are suffering day after day to meet the most basic needs for themselves and their families,” Eustace said.

“And we have to improve the economy of St. Vincent and the Grenadines, whether through the private sector and also through government to ensure that less people find themselves in that position,” Eustace said.

“That, for me, is the most important thing that this party could do — to build back the economy of St. Vincent and the Grenadines so that people, all people, particularly the poorer people in our country, have the opportunity to have decent standard of living. And that is what I am committing myself and our team to do, with your help,” he said.

Gonsalves said earlier this year that in addition to the persons on the Public Assistance roll, some 4,000 persons receive some sort of welfare benefit.