Gonsalves unlikely to return to constitutional reform even with bigger mandate 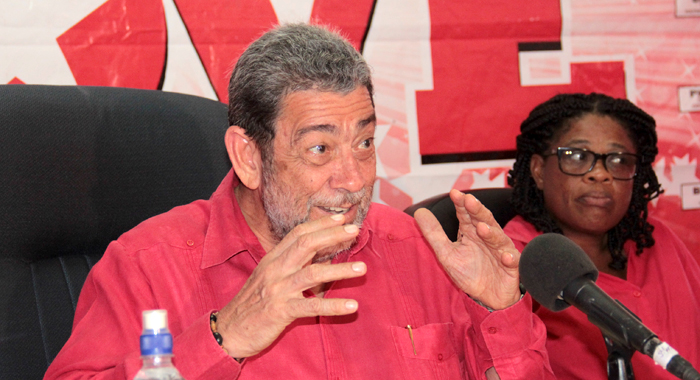 Prime Minister Ralph Gonsalves is unlikely to put back constitutional reform on the national agenda even if his Unity Labour Party wins the Dec. 9 elections with a larger mandate that the 12-3 secured in the 2001 and 2005 elections.

“I think the new generation of leaders will put the issue of constitutional reform again on the agenda, if they so decide,” said Gonsalves, whose government failed in 2009 to convince the Vincentian electorate to amend the constitution left by the British at Independence in 1979.

“In my own case, I did that, it failed,” Gonsalves told reporters at a press conference of his Unity Labour Party this week.

Vincentians will elect a new government on Dec. 9 and Gonsalves said he is confident that his Unity Labour Party administration will be returned to office for an unprecedented fourth consecutive term for a Labour government in SVG.

He said that the party, which lost four seats in the 2010 elections, will win the December vote than the 12-3 margin that it came to office on in 2001, and which it retained in the 2005 vote.

Asked if, with a larger mandate, he would return to constitutional reform, Gonsalves said:

“I leave it for another generation. Constitutional reform referenda are not things you should do every Monday morning. You have to give a certain time to pass,” he said.

“Of course, I hope I am still alive to campaign for essentially the same kind of issues which failed the last time,” he said.

Political observers have said that the revised constitution was doomed to fail with the referendum coming just one year ahead of general elections.

The main opposition New Democratic Party, which withdrew its support for the pi-partisan effort months before the referendum, has been accused of turning the referendum into an election campaign.

Political observers have said that the Gonsalves government used the referendum to test its popularity ahead of the 2010 elections, in which it was returned to office by a one-seat majority.

Gonsalves told the media this week that his government might have attempted too much at once.

“It may well be that we were too ambitious with the menu of changes that we had put before the people. But that is gone and that is for analysis and so on. But all I know is this, that we got 45-46 per cent of the vote in 2009 and whoever comes after to deal with the issue of constitutional change, constitutional reform, stands on the shoulders of those of us who engaged in that epic battle in November 2009,” Gonsalves said. CMC/kc/2015