‘Your vote is your voice’ — Young Democrat tells youth 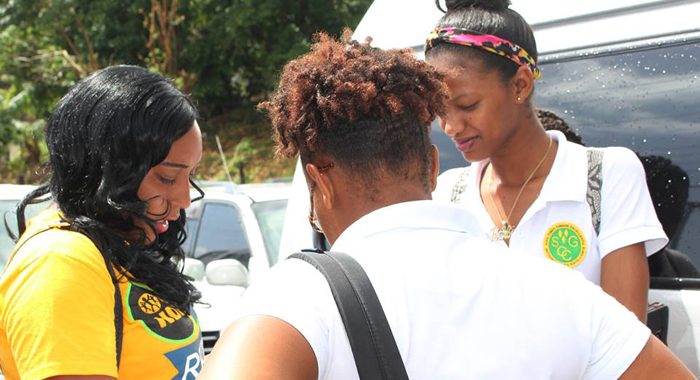 President of North Windwards Young Democrats, Shaffiquer Nanton, interact with students outside the community college during a campaign event. (Photo:NDP/Facebook)

A youth leader within the main opposition New Democratic Party (NDP) has told young voters that their vote is their voice in the Dec. 9 general elections.

“On several occasions, I have spoken or used the phrase, your vote is your voice. I would like to elaborate a bit on what I mean when I say your vote is your voice. Come December 9th, when you mark your X next to the NDP, your voices will be heard,” Shafiquer Nanton, president of the North Windward chapter of the Young Democrats, told the NDP rally in Sandy Bay Sunday night.

“Your voices will be heard. You will be speaking out about victimisation, high taxation, and a high unemployment rate,” Nanton said.

“Our young people need.., a better team , but guess what? The better team cannot do it by themselves,” she said, telling party supporters that the need to do  “some discipling”.

She encouraged NDP supporters to read the party’s manifesto and to share it with others.

“We need to build back our country and we need your help. We need to so some disciplining,” she said. “Take this (manifesto), encourage others, read it for those who don’t understand and let them know that the NDP is ready to lead.

“We need to build this country and we need to do it together. Lauron Baptiste, we will walk confidently to the polls with you, and we will bring North Windward home,” she said of the NDP’s candidate for North Windward.

“For the past couple of months we have been working hard and we are behind Lauron Baptiste 150 per cent,” Nanton said.