Ces neglected West St. George even in his own ministry — Jules 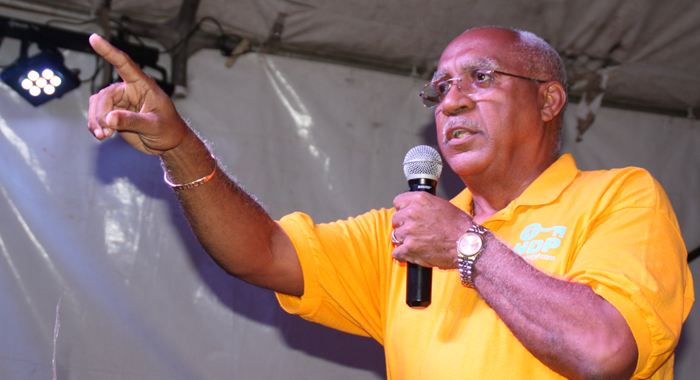 Julian “Jules” Ferdinand, the main opposition New Democratic Party’s  (NDP) candidate for West St. George has appealed to constituents to vote out the incumbent, Cecil “Ces” McKie of the Unity Labour Party (ULP), saying that McKie has neglected the constituency, even in the area of sports, for which he holds ministerial responsibility.

“This West St. George constituency has been neglected for 15 long years. I wish I could put it in a mild manner but that is the truth and that is the fact of the situation,” Ferdinand told an NDP meeting in Arnos Vale on Wednesday.

“I want to tell you that I am really very disappointed. I am not into mudslinging and it is not a mudslinging effort, but it is a reality, it is a fact that if you have this present area representative being minister of sport for so long, why is it that the representative has allowed so many of the sporting facilities in West St. George to be in such a terrible condition,” Ferdinand said.

McKie was elected in 2010 and was appointed Minister of Health, Wellness and the Environment, but was reassigned to the Ministry of Tourism, Sports and Culture in February 2012, during a cabinet reshuffle.

Ferdinand spoke of “the situation” at the Gomea Hard Court, saying, “That one really hurts me.”

He explained that before and while he was CEO of the Eastern Caribbean Group of Companies, he placed emphasis on the sponsorship of netball.

“So when you think of how that Gomea Hard Court has been left to deteriorate, so much so that this year they could not have a tournament — not even for the young girls to play, not even for the school-aged ones — really, it is a sad thing to think of what has happened to the older females in West St. George who have not been able to practise there, and, therefore, they reduce their chances of playing at the national level.”

Ferdinand said that residents of Dorsetshire Hill speak of the challenges they continue to face at the playing field in their community, adding, “They tell you of how much they are interested in self-help projects to make that playing field better.

The first-time candidate said he could also talk about the Belair and Dauphine Playing Fields.

“And I feel that one of the things that our administration must do, the New Democratic [Party] administration, when it comes to office on Dec. 10 is that we must take a serious look at all the sporting facilities throughout the length and breadth of St. Vincent and the Grenadines, but I will put in a special plea in particular for the sporting facilities in West St. George,” he said.

“We need to have those kinds of activities, and as far as the Dauphine Playing field is concerned, I do not think it is going to be beyond our government to make sure that that playing field is lit,” Ferdinand said.

“There need to be lights on that facility so that our people could have access to that facility, whether it is for cricket, for soccer or the other activities that will come up. And it is to just to keep people occupied. It has a very strong value as it relates to health and wellness for our people,” he told party supporters.

Ferdinand said that he spoke the previous night about the neglect of the many bridges in the constituency.

“I was pleased, when, during my presentation, when I talked about the bridge leading to Spa I was told that after my presentation at the Gomea Hard Court when I talked about that and the absence of the rails, that they’re now fixing it. And I say thank God for public meetings like this when we can have the conversations and persons can get up and do what should have been done years ago.

“There is no excuse for the absence of these activities and these facilities.”

He spoke about the many roads that he said need to be properly surfaced.

He said that in Belair there are areas with less than 50 yards of unpaved roads that could quite easily be fixed.

“This $14 million that is being bad-spent with galvanise, cement and lumber would have been better spent if you had looked at how you could improve the road condition leading to some of the houses in this constituency and throughout the length and breadth of St. Vincent and the Grenadines.

“Those bridges in West St. George need to be attended to,” he said.

He told the campaign event that there is a track going up to Robertson Hill area and when it rains it is very difficult for residents to get to their homes.

“I am told that they have asked for a track to go up there and up to now a track has not been provided,” Ferdinand said.

He said he was shocked to see the condition of the drain when he went there to visit a friend two days before the meeting.

He said that when one listens to the people at Mango Tree Bar talking about the type of challenges they have going up the area, “it tells us that that kind of neglect should not be happening so close to the main road here in this blessed place of Arnos Vale…

“I say to you that when we are in office and when Jules Ferdinand is the area representative for West St. George, if you find that I am taking too long to resolve these issues, you have a right and a responsibility and a privilege to approach me and say, ‘Jules, you talked about it on the platform, we need some action.’”

Ferdinand said that constituency needs to hold him accountable if he is elected.

“… that is the kind of governance that this New Democratic Party, that this team, led by the Honourable Arnhim Eustace is rolling out.

“We will not sit in ivory towers and put barriers to keep people from approaching us,” he said .

“But, even as I say that, I want you to understand and appreciate that we will not be able to do everything one time. But I am encouraged, as I go through West St. George that when we have these kinds of conversations, even without me prompting you, you say to me, ‘Jules, you don’t know what you all will meet inside there. We will be patient because we trust you guys. We know you are honest, decent people and we know that you will look out for the interest of the common man.’

“And so, I am encouraged, we are encouraged as we go forward,” Ferdinand said.