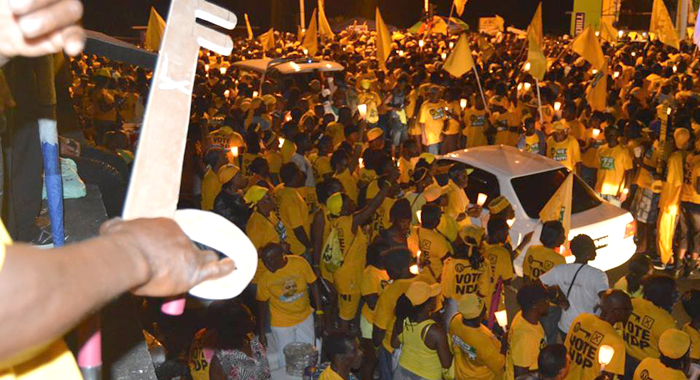 A former high-ranking member of the Unity Labour Party (ULP) says that St. Vincent and the Grenadines (SVG) needs a change of direction and is urging voters to elect the main opposition New Democratic Party (NDP) in Wednesday’s general elections.

“In our country today, despondency is over the land. Among the things that Vincentians are concerned about [are] victimisation, rank partisan politics, where people are made to be dependent on the political party and the government, unemployment, widespread crime. All of these things are bearing down on our people in a way that make them bawl today. What are we going to do about it?” Stanley “Stalky” John told an NDP rally in Sion Hill Wednesday night.

“I am left with no doubt at this time that Vincentians are resolved to take matters in their own hands as they have been doing in the streets and the villages and at these public meetings and that come Dec. 9, they will effect a change,” the former East St. George representative on a ULP ticket told NDP supporters.

“I am here because it’s my duty to rally with Vincentians as we tek back we country,” John said in his first political speech in years.

“I am responding to the call of [calypsonian] The Man Age, who is the voice of the masses. We must tek back we country,” said John, a Queen’s Counsel lawyer.

John told the gathering that he was once a major critic of the NDP government — which was in office from 1984 to March 2001.

He said he was not at the meeting with “any grandiose notion about my own personal political destiny”.

He, however, said that persistently over the past months, Vincentians from all walks of life have sent a signal that there needs to be a “definite and resolute movement of Vincentians.

He told party supporters that during the era of Chief Minister E.T. Joshua, it was said that if Joshua chose a broom as a candidate, voters would elect it.

“But we have a problem at this particular juncture,” John said, noting that in March 2001 the electorate voted out the NDP And chose the ULP.

He said the ULP administration has managed the country “miserably, but, worst still, they have assumed heirs” and behave as if the country belongs to them.

He said SVG requires “leaders that are not merely politicians in the way they go about managing the affairs of this country”, adding that in his last political address years ago, he made a distinction between politicians and statesmen.

“But what our country needs is that our politicians must demonstrate the characteristics the traits, they must approach the grave responsibility of running our country, demonstrating the attributes of statesmen; not just mere politicians. We must be able to put our country first and our own personal ambitions after.”

John said that this does not happen easy, adding that the country had changed from one politician to another, one party to another, but the persons who were elected to improve the lives of the masses, their lives and those of their friends are being improved instead.

“But how about the lives of the masses of the people?”

John said he considers a political party as merely a vehicle in the quest for political change.

He said that a commuter might be accustomed to travelling in a particular van, but would chose another if the driver is reckless or rude.

“So, it is not the van that is important. And I want you to understand that too … But it is way in which you are able to ravel in that vehicle to get to the destination that you want to reach.

“So, for me tonight, it is not the party that is important. I see yellow shirts, and I see ‘NDP’ written on them, but beyond that, I see something far more important. I see the anxious faces of thousands of my fellow citizens looking earnestly, looking expectantly and hoping that a new team can arise and can offer something better than they are now experiencing.”

John said this has always been his concern in his involvement in politics.

“The people, the welfare of my country; not my political career. I come to you tonight and I speak on this platform and when I have spoken here, I may speak again on another platform during the course of this election.

“But, after that, I am going back to the comfort of my family and to my law practise, because that is where I have found personal satisfaction and fulfilment.

“But I cannot run away this time. I cannot sit aside, aloof, and pretend that what is happening doesn’t affect me.

“And if tonight, by appearing on this platform I can assist even two, even three, even four Vincentians to have a clearer perspective on the condition we are today in our country and where we must go, I would have felt I have done my duty,” John said.

John was elected MP for East St. George on a ULP ticket in 1998 but ran with now defunct People’s Progressive Movement, in 2001 after falling out with the ULP.