Riding Shotgun: The NDP must look deep within 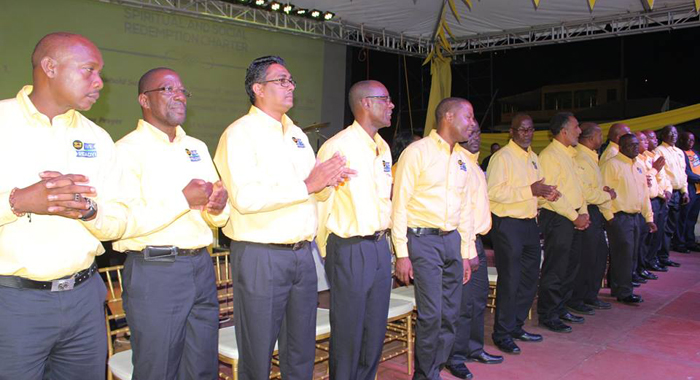 I was in my bed after taking my late-night shower but just driven by the urge to speak my mind I got up and pulled out my keyboard.

“St. Vincent People” we have come to the end of another general election here in this country and the New Democratic Party (NDP) has been beaten for the fourth consecutive time in as many elections by the governing Unity Labour Party (ULP).

Arnhim Eustace ,the leader of the NDP, led the party to their fourth defeat while Dr. Ralph Gonsalves has triumphed for the fourth time with his ULP.

will be hard pressed to find a plausible enough reason for him to remain at the political leader of the NDP. It is, therefore, now advisable that he gives up the party leadership while remaining as the head in the Parliament. ‘No how can that be possible?’ is the obvious question raised by those still hooked on sentimental value. My answer is simple, it is possible and has worked before and is going to work now once the organisation’s interest is placed above selfishness and ego. However, if this poses a situation, which is untenable one of the candidates can be persuaded to resign in order that the elected political leader also becomes the parliamentary leader.

The mental search, head scratching and process of elimination has begun immediately upon you reading this even as some of you will still be dismissing my suggestion but if you so love your party, you must be prepared to take some tough decision in its interest and to preserve it as a viable alternative.

There are many candidates who would fancy their chances of being at the helm of the party, and that’s their right. But do these people with this ambition have the acumen to lead a major political party in a way to attract voters? We must look at the possible candidates to see what they offer.

It is clear that St. Clair Leacock, Dr. Linton Lewis, Dr. Goodwin Friday, Daniel Cummings and Roland “Patel” Mathews are the forerunners within the party.

It is clear that many people appreciate the work that Major Leacock is doing for the party and his speeches at the political event on many occasions have been the highlight of the night. However, from my assessment and checks, when it comes to him leading the party, there are many who do not stand in his corner, for whatever reason. The consensus is that he is arrogant and at times too brash with his comments. The feedback is that he may be a good deputy with the hope that the leader remains in good health all the time and lives long.

Dr. Linton Lewis, whose ambition, based on numerous comments from persons, is to lead the NDP since, according to them, he champions his cause as being the most qualified in the Party. This, certainly, may be a good argument, especially when you have to be on the world stage, but not here where popularity at the polls is the vehicle on which your desire to high office is transported. Unfortunately, Dr. Lewis has either refused to buckle his seatbelt or arrived too late for the departure of that vehicle. It, therefore, means that without a presence he has no argument and in the ruthless arena of Vincentian politics. Even though his name is on the manifest but he is not on board, no one enquires of his whereabouts. No one doubts his knowledge and qualifications, but his perceived attitude of being aloof and arrogant clearly does not sit well with members and supporters of the party.

Daniel Cummings is one who has shown little interest or ambition to lead the NDP and this may have forced him out of contention of being taken seriously. Seen by many as a no-nonsense and principled individual, Cummings, who made what is said by him to be a reluctant entry into local politics, could find it difficult to attract the support of those beyond the Party’s base to impact nationally.

Dr. Friday has been Mr. Eustace’s deputy for the last 14 years and is seen as being very close to a mirror image of the leader. This, while being a good thing at times, is not what the NDP needs at this time as it hopes to battle a robust and aggressive Dr. Gonsalves. Friday is, therefore, looked upon as the essential deputy.

Matthews is one of the most affable persons in Vincentian politics and has made many friends and admirers even when being uncompromising in his comments. He has grown in stature (not physically since his chubby five foot figure has not changed) in the years since coming to the fore a few elections ago. His knowledge and confidence have been the hallmark of his leap and bound (bounce) in the eyes of many. The infancy of his leadership potential may require him understudying a more experienced and mature individual.

And who would be that person who could groom “Patel”? My choice is Jerimiah “Jerry” Scott.

Scott, who began his political career in the 1970s while still in his early 20s, remains one of the NDP’s most popular politicians. His tenure as a minister of government from 1984-2001 endeared him to many from different parts of the aisle and is still true to this day. This is so even as the NDP has made a concerted effort to keep him out of the internal circle of the party’s operations. It is thought by many that he does not need Eustace to step aside to become the leader of the party but can do so in a head-on contest. Scott has expressed frustration and disappointment at the efforts to exclude him but remains committed to the cause. But he would be hard pressed to ignore the cry of those who yearn for a political savvy, charismatic, experienced and honest leader. It is also felt that his ascension to the top position will heal the rift between Sir James and the current leadership, which has done little to improve the organisation’s fortune.

Scott’s return will see the NDP locking down South Leeward in convincing style, with that spinoff positively impacting Central Leeward and the national energy returning to the party. It will also see a man who would make Dr. Gonsalves think twice about making some decisions, which are now taken with little respect for the opposition.

I honestly think that the NDP membership, out of their desire to move forward, should now request a retreat and make the plans for the change of leadership. It must also include a call by the constituents of South Leeward for the weak and lazy Nigel “Nature” Stephenson to resign, thereby paving the way for Scott to enter the Parliament.

This even as the current fallout from the 2015 General Elections are still being played out.

I have spoken of my support for Mr. Arnhim Eustace over the years and still sees him as an honest and decent man who deserves the chance to take charge of this country but my admiration for him pales in comparison to the love of my country and the pain of the thousands who have been left in despair at the end of each of the last four Elections. I, therefore, make this call without prejudice and with the wish that the masses will get something new.

In my next piece I will address what I think are the NDP’s shortcomings over the years that have seen them coming up short at the polls.

7 replies on “Riding Shotgun: The NDP must look deep within”