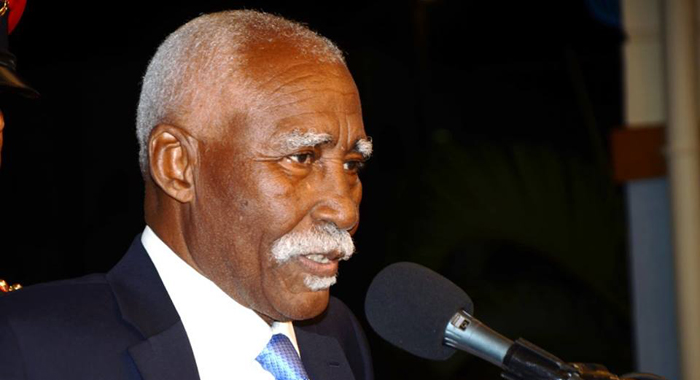 Governor General Sir Frederick Ballantyne has again noted the divide in St. Vincent and the Grenadines, adding that the church and political parties have failed to bring the nation together.

Speaking at the swearing-in of the new Cabinet in Kingstown on Monday, he appealed to citizens to each play a role in healing the nation.

Sir Frederick noted that the programme for the ceremony read more like one for a religious service.

“It all goes to show that our country is steeped in Christianity,” he said.

The Head of State said he was at a church service three weeks ago and the preacher asked the congregants each to greet the person next to them and say, “God loves you and I love you.”

Sir Frederick said that as Governor General he is “very concerned about the division in our society, the division which has been made worse by the general elections.

“I have thought about this over a number of years and wonder why we cannot bring all of our people together. My personal opinion is that we have been depending on institutions — the party and the church — and they have failed to do so.

“So, my question to you is, ‘Can you, as an individual, do anything to bring our people together?’ We are all one Vincentian people, regardless of how we voted. And if this country is going to progress, we need unity.

“This is not something new coming from me. If you note a number of the addresses that the Honourable Prime Minister gives, he speaks of getting the people together in unity.

“We cannot move forward unless we unify our people. So, my charge to all of these members of Cabinet and maybe my charge to you is that tonight, before you go to sleep you have a conversation with yourself. And if you believe in God, you can invite him into the conversation and ask yourself ‘What can I, as an individual, do to bring all our people together?’”

The ceremony and the Governor General’s comments came as the main opposition New Democratic Party protested in Kingstown over the results of the Dec. 9 general election, which it claimed it won.