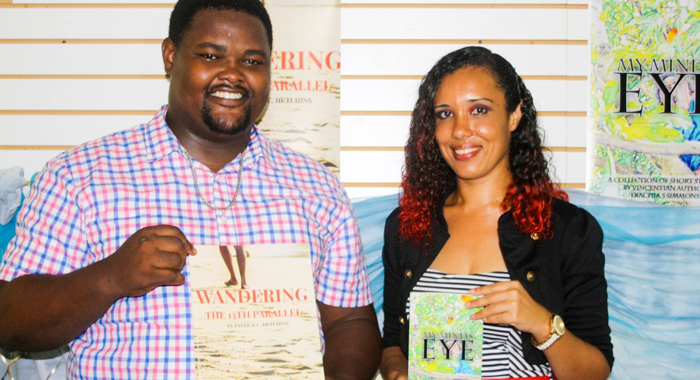 Two Bequia residents, Patrick Hutchins and Trachia Simmons, hosted a joint release of their book and magazine on the weekend.

Simmons, is an aspiring young author who self-published an anthology of short stories in her book, “My Mind’s Eye”.

The stories are based chiefly on Vincentian culture, dialect and lifestyle.

Each story brings the reader that much closer to the reality of what it is like to live in St. Vincent and the Grenadines, through the eyes of both children and adults. Her aim is to provide entertainment through a variety of partially humorous situations and witty characters while sensitising non-nationals and reminding nationals of the rich culture and traditions that make a true Vincentian.

This compilation also seeks to provide Vincentians of all ages and walks of life worldwide with literary work that they can relate to or reminisce on and a language (dialect) which is their own.

Famed storyteller and manager of the Bequia Bookshop Cheryl Johnson, who critiqued and reviewed the book before print, read two stories from “My Mind’s Eye” for persons in attendance.

The stories were well received.

Hutchins, a quite talented and artistic photographer in Bequia, also self-published and launched his work.

Hutchins was inspired to produce a magazine, “Wandering the 13th Parallel”, as a way to present his photography, which captures scenes of life on Bequia.

The magazine is so titled because the 13th parallel (line of latitude) passes through only 23 land masses on earth and one of which is Bequia.

In addition to his magazine, Hutchins also showcased a riveting array of his work in a photo gallery style exhibition. The walls were draped with breath-taking sunsets, a kaleidoscope of colours captured in the nature shots and stunning portraits. Pictures are on display at Patrick’s photo studio in Port Elizabeth.

Both authors indicate that they will be following up on their work and are proud to have the support of their community, friends and family.