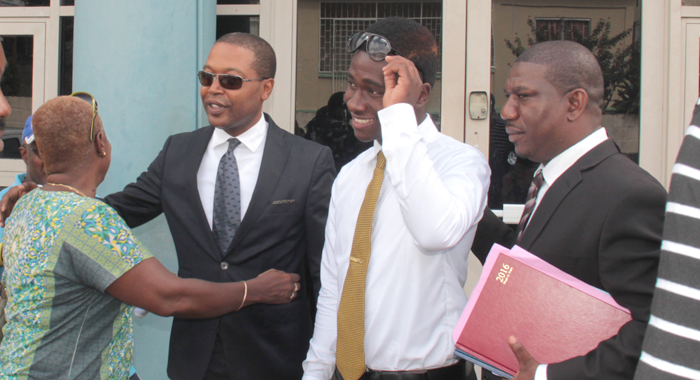 Ben Exeter, second left, and Shabazaah GunMunro George, along with their lawyer, Israel Bruce out side the Kingstown Magistrate Court on Wednesday. (IWN photo)

A lawyer for opposition politician Ben Exeter says the three charged brought against him on Tuesday are part of a political witch hunt, intended to prevent him from contesting future elections in St. Vincent and the Grenadines.

Exeter, who was the New Democratic Party’s (NDP) candidate in the Dec. 9 general elections, pleaded not guilty to the charges and is scheduled to reappear in court on Jan. 25, 2016 for trial.

He was arrested in Kingstown where NDP supporters were protesting the election results as the ceremonial opening of the 10th Parliament was taking place.

Station bail, which was granted on Tuesday, continues.

He is charged that on Dec. 29 at Kingstown, he did assault police corporal Cuthbert Morris, acting in the due execution of his duty, contrary to section 196 of the criminal code.

Exeter is also charged that on Dec. 29, at Kingstown, he did resist the arrest of Morris, acting in the due execution of his duty, contrary to Section 196 of the Criminal Code.

He is further charged that on Dec. 29, at Kingstown, he did assault Granville De Freitas of Chester Cottage, causing actual bodily harm, contrary to section 193 of the Criminal Code.

Exeter contested the Central Leeward seat in the Dec. 9 elections on an NDP ticket.

Electoral officials say he lost by 313 votes to the ULP’s Sir Louis Straker, but the NDP is claiming victory in that constituency and that it is the duly elected government.

The High Court on Monday denied an application to grant Exeter access to certain electoral document relating to the election in Central Leeward.

Speaking to I-Witness News after Exeter pleaded not guilty to the charges, his lawyer, Israel Bruce, said: “It is no secret that Benjamin Exeter has been involved in a matter that emanated from the elections of 2015.

“Whether or not there is a clandestine approach by the authority to seek to have a criminal record laid against Ben Exeter so that any prayerful consideration by whoever is praying about whether elections will be re-called in 2017, if that is the objective, all we can say, that objective will be defeated and will be defeated in the court of law.

“So, I think it is a witch hunt to criminalise Ben and to avoid him the possibility to re-contest Central Leeward. That is how we feel about that,” Bruce said.

“But, in the due course of time, that will be addressed,” he said.

Bruce said the defence, which includes lawyer Kay Bacchus-Browne, “will see what comes out of that.

“But, if it is that in this modern society that a young man cannot take out his camera and snap a picture but any other person can take pictures, that becomes and offence to the police officers of this state, then it says that we have an understanding why the Police and Criminal Evidence Act was repealed, because police ought not to be operating as if they have some sort of authority that is unrestricted. Those are the issues that the police will have to deal with.”

The Police and Criminal Evidence Act (PACE) instituted a legislative framework for the powers of police officers as well as providing codes of practice for the exercise of those powers. The aim of PACE was to establish a balance between the powers of the police and the rights and freedoms of the public.

PACE was repealed a few years ago in SVG.

Bruce told I-Witness News that a “zapper” is “what we know to be a Taser” adding, “And I will say nothing further to that, because it is a technical circle upon which the case will turn.”

Station bail has been continued in George’s matter and he is also slated to return to court for trial on Jan. 25.

Disclosure in his matter has also been set at Jan. 11.