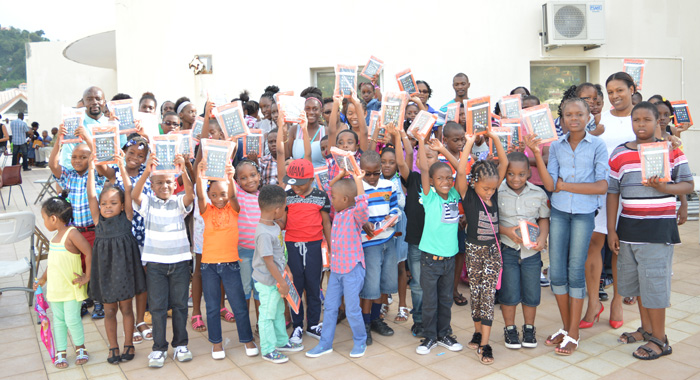 The Police Co-operative Credit Union held its Second Annual Junior Savers Weekly Challenge Awards Ceremony on Thursday in which 89 Junior Savers, accompanied by their parents/guardians, were each given an Amazon Fire Tablet for successfully completing the Challenge.

Manager of the PCCU, Seymonde Mulcaire congratulated the successful Junior Savers and said that their achievement is an indication that even at their young age, they can be disciplined savers.

She encouraged them to continue to save because they are the future of the credit union movement.

The PCCU manager also gave an overview of the Challenge, which was the brainchild of former manager of the PCCU, Daniel Robertson.

It began on Jan. 2, 2014 and has blossomed into a very rewarding initiative both for the Junior Savers and the PCCU.

The Challenge was opened to children ages 0-14 and each child had to save one dollar more each week for 52 weeks. She further explained that the Junior Savers were not allowed to pay in advance or late because this meant that the child would have forfeited the Challenge, which would have led to an automatic withdrawal from the programme.

She also encouraged the young savers to continue saving the PCCU and to “to count their pennies and the dollars will take care of business”.

President of the PCCU, Junior Simmons told the gathering that the PCCU is living up to its motto — “Towards a Sustainable Financial Future” — by investing in the future of young Junior Savers who happens not only to be the future of the credit union movement but also the future of St. Vincent and the Grenadines.

Simmons told the Junior Savers that completing the Challenge was something they should be very proud of because it says that they are capable of setting goals and achieving them.

The president also charged the children to use tablets wisely — not just to play games, watch movies and listen to music but, more importantly, to use them to further their education — to do homework and research.

Simmons also thanked members of the PCCU, his fellow directors, committee members, management and staff and other volunteers for their hard work and dedication to the PCCU during 2015.

In delivering the keynote address at the event, Montie Chambers, acting manager of the SVG Cooperative League, congratulated the winners and also commended the PCCU for the initiative of giving children the opportunity from a very young age to be thrifty.

He Chambers told the youths that if they save with the Credit Union consistently for 14 years, they will each save $19,292, which would greatly assist them in preparing for O’Levels and better equip them to manage their finances as young adults.

The top Saver for the Challenge for the second time is Calvert Cuffy Jr, who saved $2607.

He was awarded with a gift voucher from Jujube Book Store.

The PCCU’s Junior Savers Challenge continues in 2016 and interested persons have until Jan. 9, 2016 to register their children.

Also at the event, Mr. Carlon Thomas was recognized with a plaque for copping the Employee of the Year Award and the Police Credit Union also launched its website. www.svgpccu.com.