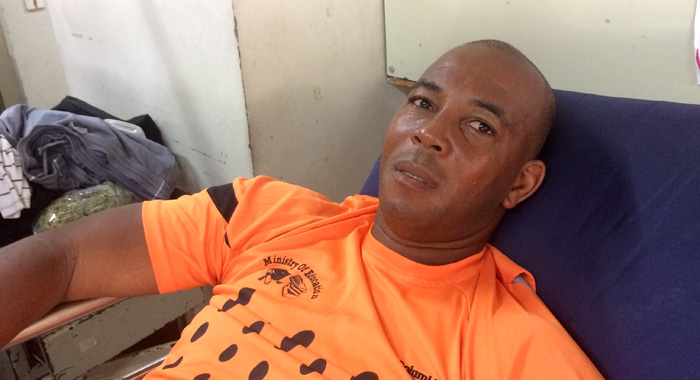 Stanley Isaacs was shot in the presence of his 3-year-old daughter. (IWN photo)

A businessman and teacher is in hospital nursing a broken leg and gunshot wounds he sustained during an armed robbery at his business place in the presence of his 3-year-old daughter Monday night.

Stanley “Dula” Isaacs, who teaches Grade 3 at Buccament Government School, told iWitness News that the robbery occurred around 10 p.m. in his business place, which is located on the ground floor of his house in Rillan Hill.

Isaacs, who also coaches the Rillan Hill United football team, was packing some LPG cylinders and preparing to lock up for the night when an armed man wearing a Halloween mask entered the property.

“My daughter was there and I saw a masked man came in. He was saying something, then he came to the front to enter where I was.”

Isaacs said the robber fired off a shot, which struck him in the leg, breaking his femur.

“My daughter was crying,” Isaacs said.

He said three other villagers were in the shop and another armed robber entered the building while a third stood at the door.

“I didn’t understand what they (robbers) were saying at first. … Then they demanded money and I told them to look in the bucket. When they collected that money, they said, ‘You got to have more money.’ Then they pointed the gun towards my daughter and said ‘If you don’t the money, we will shoot you.’ Then pointed the gun to me.”

Isaacs said he has some other monies for the purchase of cylinders of LPG and he told the robbers were that money was located.

In all, they made off with some EC$5,000 dollars, including that day’s earnings, plus money that they businessman had on hand to buy LPG for resale.

“All three had guns and all three were masked,” Isaacs said of his attackers.

“It’s a terrible situations. It seems that the criminal element of our society is becoming, as one would say, prevalent. So, maybe today for me, tomorrow for someone else.”

Isaacs has been running the wholesale and retail business for eight years, but has never had any such crime committed against him or his business.

He, however, said, someone had warned him about the possibility that he could be robbed, and another person told him recently that they had heard rumours that persons were planning to rob him.

“I didn’t take it seriously because I have been in this business for a long time and nothing ever happened,” Isaacs said.

He said one of the villagers got a tooth knocked out during the struggle in the business place.

“I don’t know who else they gun butt and so forth,” he further told iWitness News, adding that one of the robbers also struck him in the head with the butt of a gun.

“After the robbery, they ran down the road. They had a bag and so they put the money in the bag and fired off a shot,” Isaacs said.

He said a villager said that the robbers left in a vehicle.

“It was a terrible experience. If I were armed, it would have been a different story,” Isaacs told iWitness News, adding that having been robbed he is planning to apply for a firearm.

One reply on “Businessman shot during armed robbery”