Prisoners get vocational training in basketry 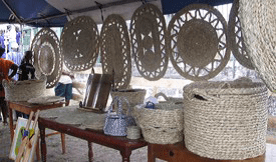 Some of the baskets made by the prisoners.

A training programme/workshop delivered by the Food and Agriculture Organization of the United Nations (FAO) in raw materials’ harvesting and mat and basket construction is reaping rewards.

Eighteen male and female inmates of Her Majesty’s Prison in Kingstown were trained in vetiver mat and basketry construction.

The training aimed to offer inmates the opportunity for social and economic re-integration, whilst addressing the wider issue of forest livelihood creation to strengthen the forest rehabilitation drive currently being undertaken by the Forestry Division of the country’s Ministry of Agriculture.

The prison in Kingstown provided a setting for training of individuals who, through previous life circumstances and/or conditions imposed during incarceration, face severe economic and social challenges. The majority of participants were under 30 years old, with half of the participants 16-25 years.

The potential of rehabilitative prison programmes to reduce rates of recidivism is well documented. Research studies have shown that rehabilitation programmes can permanently reduce crime through the provision of employment opportunities and the re-socialisation of inmates and ex-offenders.

The workshop coordinator and trainer, Vonnie Roudette, was impressed with the inmates’ enthusiasm and rapid pace of learning, which in her experience, exceeded that of tertiary level college students.

“The vocational training provides new possibilities for inmates to generate income during incarceration as well as social and economic well-being upon release from the institution. We intend to ensure that products made in prison gain entry to the domestic market, where the demand for utilitarian handcrafts is presently high,” Roudette said.

“The training has helped me with the stress of being in jail. I feel much more happy and positive since being out [of the cell area] I would like to continue and earn a living from this,” said a 25-year-od inmate who is into the final six months of an eight-year sentence.

Additional trainers Leon Alexander and Lucita McCoy reiterated that the response to training was positive and expressed their hope that the handicraft project continues.

The team of trainers aims to establish an on-going inmate-driven production unit within the prison, with linkages to small business operations in the private sector.

Director of Forestry, Fitzgerald Providence, indicated that the Forestry Division of the Ministry of Agriculture implemented a vetiver planting initiative in early 2015 to control land erosion, whilst supplying a renewable resource for the basket and mat production industry.

“Vetiver was traditionally planted to prevent erosion on banks and roadsides, but the practice has declined. We have reintroduced it to conserve soil and to utilize it in craft production, which is a livelihood creation component of our Forest Rehabilitation Project,” Providence said.

Superintendent of Prisons, Brenton Charles, welcomed the training initiative, highlighting the programme’s ability to expand the range of vocational skills that can be provided to inmates.

“It has proven immensely valuable in terms of the use of inmates’ time- through being productive and having their work admired by others, and it also contributes to their sense of self-worth,” he said.

Inmates who participated in the training programme reported increased levels of confidence and a sense of fulfilment, and all of the beneficiaries reported that the training provided them with a positive experience during incarceration to share with their families.

“I feel different from before [l did] the training. Before I felt depressed; now I have something to look forward to that I want to do. I intend to continue ‘cause I don’t want to come back to jail,” remarked a 20-year-old inmate who is serving a six-year sentence. A 23-year-old inmate who is serving a sentence of four years, also reported a feeling of satisfaction with the programme, and expressed desire to start a business in the field upon release from prison.

In just two months, the Forest Livelihood Training Initiative has demonstrated considerable potential for the rehabilitation of Vincentian prisoners, justifying further support for the programme’s contribution to sustainable production within the institution. It also warrants consideration as a flagship programme for implementation in correctional facilities in other Caribbean islands.

One reply on “Prisoners get vocational training in basketry”