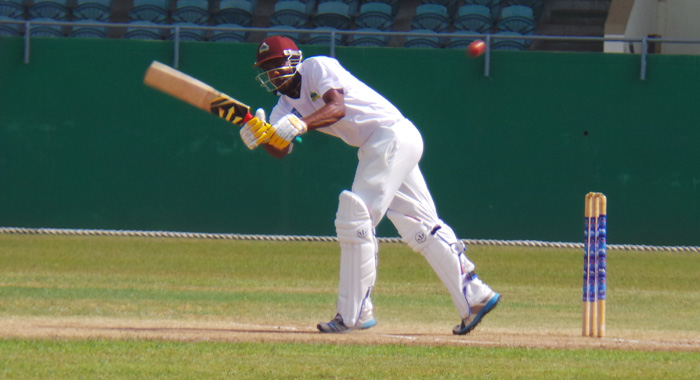 Set 210 for victory, the Volcanoes finished on 210/8 off 49.3 overs after recovering from 68/5 to record their third win of the competition and a place in the semi-finals.

Needing to score at over 12 runs an over, it was left to Keron Cottoy 23* (13balls two sixes) and Shane Shillingford 21* (13 balls two sixes) to see their team over the line with 3 balls to spare.

The Windwards at their turn at the crease, ran into early problems and lost wickets steadily and at crucial points in the game. It was then left to Ambris and captain Liam Sebastien (27), who added 74 for the sixth wicket to give the Volcanoes some hope. But Crandon, who was later named man of the match, removed both men. Their partnership, however, had soaked up a lot of balls with Sebastien’s 27 taking 52 balls. The asking rate with the latter’s departure was then just under 10 an over.

With the rate now a near astronomical 12 an over, the left-handed Cottoy and Shillingford then used the long handle to great effect.

The Windwards had also recorded wins against the Leewards and Guyana in their two previous matches.

Chasing the Leewards’ total of 238, Johnson Charles led the way for the Windwards with a brisk knock of 72 off 72 balls before being caught off the bowling of Daren Cruickshank.

He received strong support from Kyle Mayers, who ended on 55 not out, and hit the winning run as the Windwards scrambled home with three balls remaining.

Jacques Taylor was the pick of the Leewards’ bowlers after ending with figures of 3 for 27. In their turn at the crease, the Hurricanes were powered by knocks of 74 off 110 balls from Montcin Hodge and 64 off 125 from Cruickshank. Mervin Matthew’s did the most damage with the ball for the Volcanoes, claiming 3 for 49.

And against Guyana, a fighting 91 from Volcanoes opener Devon Smith in a total of 214, along with rain interruptions, gave his side a 1-run victory over the Jaguars.

Guyana were 122/4 when play was called off and were deemed to have lost by 1 run.

The game, a low-scoring affair, saw the Volcanoes slip to 214 all out in 50 overs of batting, as only Smith and Ambris, 47, put up any resistance.

Gudakesh Motie, 3 for 32, and Steven Jacobs 3 for 40, ripped through the heart of the Windwards batting.

In response, 44 not out from Assad Fudadin, backed by Vishaul Singh’s 21 at the top of the order, Leon Johnson’s 25 and Raymon Reifer’s 18 not out meant Guyana got to 122 for 4 and were in with more than a shout of overhauling the paltry score — that is, until the rains came.

Initially, the Guyana innings was reduced to 33 overs with a target of 175, which was more than within reach of the Jaguars, who still had 6 wickets intact and Fudadin still at the crease.

However, a further rain reduction meant Guyana were reduced to the 26 overs they had already faced and found themselves one run in arrears with 123 the new target.