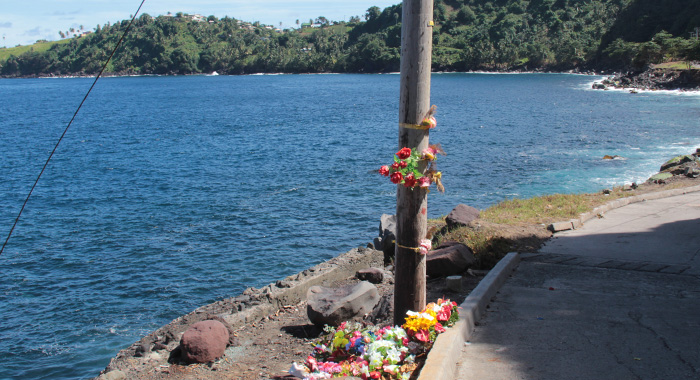 Wreath laid at Rock Gutter on Tuesday. Leader of the Opposition Arnhim Eustace raised questions about how much safer is the site one year later. (IWN photo)

Leader of the Opposition Arnhim Eustace, on Tuesday, asked questions about what had been done to improve public safety and rescue services in the year since seven students lost their lives in the Rock Gutter bus crash.

The seven students died on Jan. 12, 2015, when a mini bus careened down a steep cliff and plunged into the raging sea in the North Windward community.

Speaking at the Memorial Service in Fancy, Eustace said school and other aspects of life have returned to near normal.

“But in many homes, there is still an empty seat at the table and the grief continues,” he said.

Eustace asked how life in the village and the rest of the nation has changed since the tragedy.

“Has the tragedy brought us nearer to our God? What have we done in this regard? Has the tragedy taught us more to be our brother’s keeper?” he said.

Eustace asked if there are any aspects of the nation’s insurance laws that should be reviewed and whether such a process had begun.

“Should our road transport system be reviewed and overhauled as it relates to safety? Are our children any safer on the roads today as compared to one year ago?

“Is Rock Gutter safer?” he said.

Eustace also asked if there is a need for additional programmes facilitated by the Traffic Department of the Police Force?

“These are question that need answers. Some work may already be in progress, but I may not be aware of it. But these questions need to be answered as we look towards the future. None of us would wish to have another Rock Gutter.”

Eustace said persons do not think about these things in their normal day-to-day living.

“But they are necessary now, given the tragedy we have faced, for us to think deeply about them. We must avoid another Rock Gutter. Now is the time to undertake these reviews; now that our population is alerted to the need and concerns that have arisen because of the Rock Gutter disaster.

“This list of questions is not exhaustive; it is but a list. But today, I am asking all of us to take another look in the interest of the safety of our people and let us make the necessary improvements.”

Eustace said that he is confident that the nation has the ability and the competence to address these and many similar questions.

He told the families that he knows that they still are pained by the tragedy, but God is with them and will help them bear that pain, as he has been doing over the past year.

“So, keep looking up to him and we will find the task much easier to accomplish.”

Speaking after Eustace at the event, Prime Minister Ralph Gonsalves said that the event was “for remembrance; a staging post for continued healing and for stocktaking.

“It is called a memorial service and not a parliamentary service to discuss public policy,” Gonsalves said in an apparent response to Eustace.

Nelcia Stay, mother of Chanstacia Stay, who died in the tragedy, told iWitness News on Wednesday that she did not think the issues that Eustace asked questions about should have been raised at the memorial service.

Asked what she thinks would be a more appropriate place, Stay told iWitness News: “I think probably if he wants to raise it in the House of Assembly or even if he wants to call a press conference and talk about these issues, then, no problem. For me, I don’t think it was the time and the place to do it.”

Jemma Edwards, whose sons, Jamarlie and Jamall Edwards died in the incident, told iWitness News in a separate interview that she also does not think that the memorial service was the place to raise those issues.

“I don’t think that was important at the service. He could have said that somewhere else.”

Edwards further told iWitness News that she doesn’t think that the questions Eustace raised are issues to be addressed.

Gloridene Hoyte-John, mother of Glenroy Michael, who died in the crash, in a separate interview, declined to comment on Eustace’s statement.