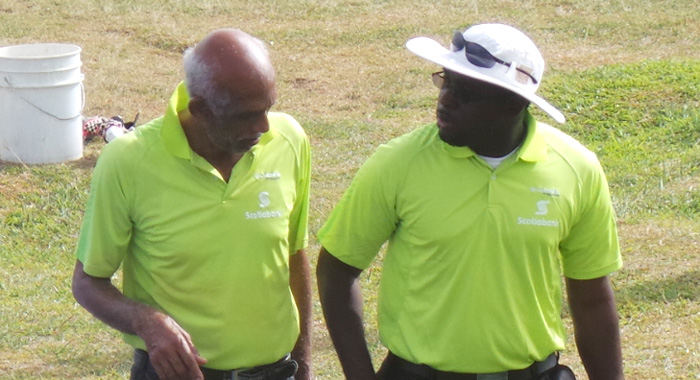 Action in the domestic cricket season continues today after and opening weekend in which triple defending champions, Team Rivals began with an imperious performance in recording a comprehensive 169-run victory over Victors 2 in their opening match of the National Lotteries T20 competition at the main Arnos Vale Playing Field.

But the opening weekend was marred by controversy.

On Saturday, in the match at the main Arnos Vale Playing Field, winning the toss and choosing to bat, Team Rivals who benefitted from a number chances, took control of the match from early. Openers Asif Hooper and Marvin Small set about the inexperience Victors 2 attack to help their team to 217/3 in their 20 overs. Team Rival then shot out Victors 2 for 48 in 17 overs.

Scoring in excess of 8 runs per over at times, the pair raised the 50 by the fifth over and the hundred in the 12th.

Small, who was not afraid to hit the ball over the infield and over the fence, was the first to go when he was bowled by Kishore Shallow for 54 with the total on 147 in the 16th over.

He struck 4 fours and 3 sixes. Hooper continued his merry way as he also lost the dangerous Casmond Walters (12) also to the bowling of Shallow’s “medium spin” to make the total 161/2.

The arrival of the flamboyant Hyron Shallow brought the usual pyrotechnics as he lashed 28 in his “quicksilver stay” at the crease –counting 4 fours and 1 six off the 11 balls he faced.

Hooper, who looked set for a century before Shallow’s Box office, was eventually bowled by Shamic Roberts 9 short of the milestone.

In his 91, he struck 10 fours and 1 six. While none of the bowlers could be said to have covered themselves in glory, Marcus McCoy proved to be the unreal McCoy by conceding 38 runs in his two overs — with 27 coming off his second.

Set the task of scoring at almost 11 runs an over, Victors 2, already reeling from the pummelling with the bat and on the ropes, were shown little sympathy by their opponents who mirthlessly went for the kill.

The slippery Keswick Williams, deivering from the Bequia End, bowled at a good clip, left the batsmen at the crease and those to follow visibly shaken. He removed Ardinal Richards (0) with a one that kicked off a length, struck the number three batsman, Shamic Roberts, on the helmet and collected a second wicket to finish with 2/1 in his 2 overs.

Then it was the turn of veteran legspinner, Orlanzo Jackson, to exploit the turn and bounce on offer as he finished with 4/12. Walters, who used the new ball with Williams, got 2/5 with his offspin.

Only Kishore Shallow with 22 showed any inclination to remain at the crease until he ran himself out attempting a tight second run.

On Sunday, at the same venue, North Leeward walked away with a 6-wicket win over Victors 1 in circumstances, which left the latter aggrieved and disappointed.

Winning the toss and choosing to bat in a match reduced to 18 overs because of rain, Victors 1 were dismissed for 72 with Kimali Williams taking 2-6.

North Leeward were then sent reeling at 4/14 in 3 overs at which point the rain, which had been intermittent all day, returned. On the resumption at 4:54 p.m. with the rain still hovering, but not falling, Davis informed the teams that based on his calculations and the tournament regulations, the batting team needed to score 7 more runs off 2 overs to win the match. He also informed Victors 1, according to captain, Donwell Hector, that fastbowler Ray Jordan, who had sent down 1 over at the time of the interruption, could not bowl another over.

North Leeward duly went on to win the match at 5:01 p.m. without losing any further wickets.

However, while Davis had taken the decision to reduce the overs and ended the match early, the match on the adjoining field between Radcliffe and Victors 2 was completed at 5:32 p.m. — a matter said to be mentioned by the Victors 1 management in their letter to the SVGCA.

Davis and the Victors unit have had several run-ins over the years with the umpire being the one to call Jordan for “chucking” on two occasions. In addition, the team has raised questions about Davis’ attitude to some of its top players while officiating. Davis has always maintained that he operates “by the laws of the game”.

An official of the Association admitted that a letter was received from the Victors management but refused to elaborate.

The competition will continues this weekend with the following matches.