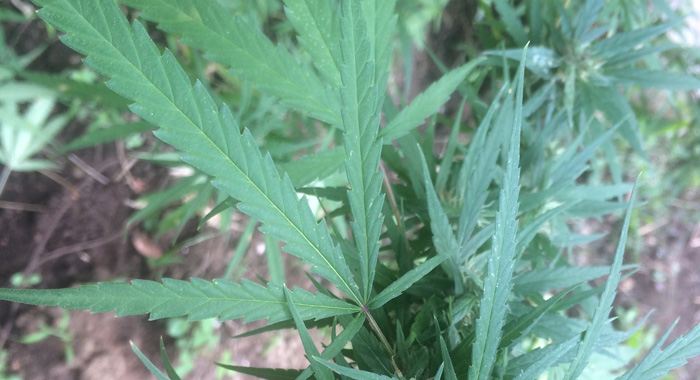 A local lawyer has asked the Minister of Health to grant him permission to cultivate a marijuana plant.

“I just want permission to cultivate one plant of the genus cannabis, or ganja, the plant that has caused so much debate in St. Vincent, that so many people don’t want to talk about,” Grant Connell, tells iWitness News.

“But I am not asking a favour of the government, I am asking just for the law to be applied,” he said, noting that he wrote to then Minister of Health, Clayton Burgin, on Nov. 5, and renewed the request when Sen. Luke Browne was appointed to that position late last year.

Connell notes that under the nation’s prevention of drug misuse legislation, the Minister of Health has the power to grant that permission.

“I have not received a response yet. I guess they are contemplating it.”

The plant will be cultivated at the car park of Grassroot Tennis Club, on Murray’s Road Kingstown, Connell says.

“I think we have given into the mindset that it is a beast, so I will treat it like that. So I’ll cage it. I also indicated that in the letter: we will put it in a 15x15x15 metal cage; 5/8 reinforced steel, BRC.”

The membership of the club includes 250 pre-schoolers and Connell says that the marijuana plant will be used or educational purposes.

“We are going to start the education process. That’s what this is all about. Come and see it. I’m no ganja specialist, I’m no specialist; I want to learn myself. And that’s why we begin the process,” he says.

He says that with the steel structure around the marijuana plant, “not even the smallest of hands” would be able to reach it.

“What they will be able to do is see the beast and ask questions about this beast. We will be doing the next generation an injustice if we don’t start to break down the barriers”

He sayd Grassroot will invite the police and other persons to discuss marijuana with the members of the sports club.

Growing the marijuana plant is part of a larger education drive at the tennis club, which involves the keeping of animals, including rabbits, chickens, pigeon and parakeets, and the growing of agricultural produce.

Connells says he will also apply to relevant authorities to keep iguana, and other protected wildlife.

Asked if the educational efforts cannot be achieved without growing a marijuana plant, Connell says:

He says that when the pre-schoolers come to the tennis club and they are asked if they have ever seen a rabbit, when it is shown to them, “One takes off as if it’s a Martian he just saw. Another child says, ‘Oh yeah. My neighbour has one’ and pats it.”

Connell believes that 75 per cent of Vincentians have never seen a marijuana plant.

“You say marijuana and everybody just goes into this –. Well the police, it has an organismic effect on police officers. Look at it, they get up at 3 O’clock in the morning, they go on a raid.”

But, it was noted that however one feels about it, marijuana is illegal.

Connell says the marijuana plant will not go away.

“Once there is light, there will be ganja. There is no factory. The factory is Mother Nature. You drop a seed, it grows. You are fighting against the inevitable. When all of us mere mortals go to our graves, ganja will still be there. So, why not address the issue now?”

Connell had previously suggested that a marijuana plant be grown at the Botanical Gardens, a suggested strongly rebuffed by the curator.