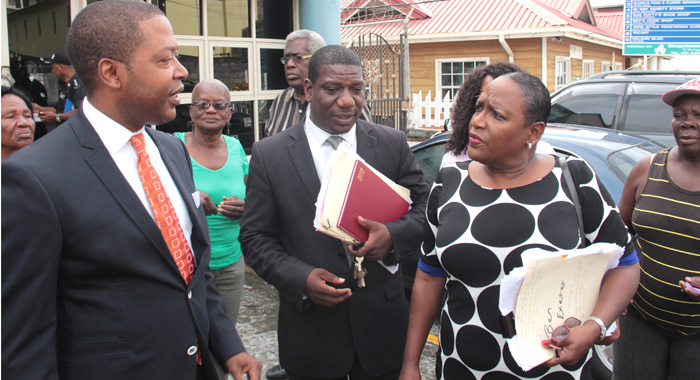 Opposition politician Ben Exeter and activist Shabazaah George are scheduled to return to court on April 4 for trial on charges stemming from their arrest in Kingstown on Dec. 29.

Defence lawyer, Kay Bacchus-Browne, applied for an adjournment when the case was called on Monday, as scheduled, at the Kingstown Magistrate’s Court.

Exeter, who was the main opposition New Democratic Party’s (NDP) candidate for Central Leeward in the Dec. 9 general elections, was arrested in Kingstown, on Dec. 29, where NDP and ruling Unity Labour Party (ULP) supporters had gathered in protest and support as the opening of the 10th Parliament took place.

Two weeks later, Exeter, who is the holder of a licensed firearm, was charged with having the gun at a public meeting. He also pleaded not guilty to that charge.

George, an 18-year-old NDP activist, was also arrested that day and was charged with obstructing Morris, who the Crown says was acting in due execution of his duty.

The young activist was also charged with having in his possession an offensive weapon, to wit a zapper.

George has pleaded not guilty to the charges.

On Monday, Bacchus-Browne told magistrate Carla James that she and fellow defence counsel, Israel Bruce, had other matters in the High Court and they were not ready to proceed with the cases.

She also said that the copy of Morris’ witness statement sent to the defence was illegible.

Bacchus-Browne further told the court that a medical statement referred to by a police officer had not been disclosed to the defence.

Assistant Director of Public Prosecution, Colin John, told the court that the Crown was ready to proceed and that the defence’s request for a legible copy of the witness statement could have been granted that same day.

When the case was called on Monday, another charge of having a firearm without a permit was listed against Exeter.

“That has to be a mistake,” Bacchus-Browne said.

The magistrate commented: “That is certainly a mistake.”

The prosecution confirmed that the charge was an error.

The defence also asked the magistrate to set aside a full day for the trial.

Bacchus-Browne noted that the Crown has nine witnesses and added that the defence will call two or three.

“She told the court that the trial is likely to take “a whole day — with the best of intentions”.