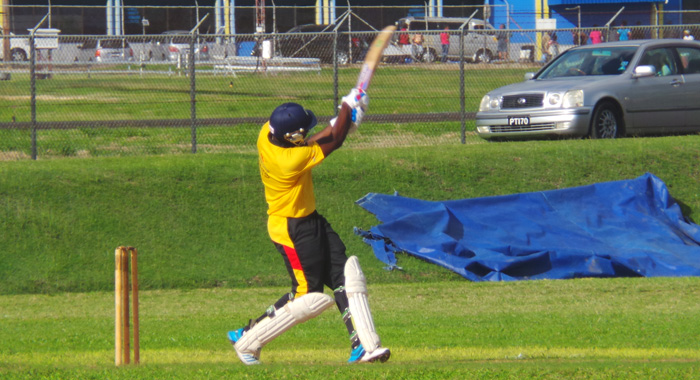 Rickford Walker pulls to leg during his half century.

Guardian General Saints overcame an inexperienced but brave North Leeward unit, to record what turned out to be a comfortable win, in a reduced match in the National Lotteries SVGCA T20 at Arnos Vale 2 on the weekend.

The start of the match was delayed after seepage from early morning rains had caused the run-ups at both to be deemed unsafe by the umpires.

The match was then reduced to 12 overs per innings.

Openers Rickford Walker and Toby Liverpool went at a gallop in raising 90 for the first wicket in 9 overs. Walker went at a searing pace in hitting 64 in that time at better than a run a ball. He struck 7 sixes and 3 fours with good cricket shots and some that “were in the dark” despite the sun being out in all its glory. Liverpool made 26 with 4 fours in a lively second fiddle display.

Guardian General Saints then racked up 52 runs off the remaining 3 overs as Sunil Ambris lashed 38 from 12 balls, which included 4 sixes and 2 fours.

Set to score about 12 runs an over, North Leeward put on a “high grade” performance that appeared to have come from “up so, up so” as they raced to 76/3 off 6.3 overs before rain forced the players off the field.

On the resumption, the umpires set a target of 44 runs in 21 balls for North Leeward to record their second upset win after beating former champions Victors 1 on the opening weekend. But they faltered badly as panic set in and could only add a further 23 runs to lose by 21.

Offspinner Andrew Emtage took 4/10 towards the end and seamer Ray Charles 3/18 at the top.

Winning the toss and electing to bat, the lawmen put in another of their now customary below par performance being dismissed for 102 in 17.2 overs with only captain Vertil Davis (30) making any impact. Davis, who has found it tough at times to perform with the bat and has been the subject of ridicule by his teammates, fought gamely in occupying the crease and hitting 3 fours in the process in a manful display.

Carl Joseph Law Chambers ASCO easily got to their target in 12.1 overs, with Daron Greaves hitting an unbeaten 45, which included 4 sixes and 3 fours.