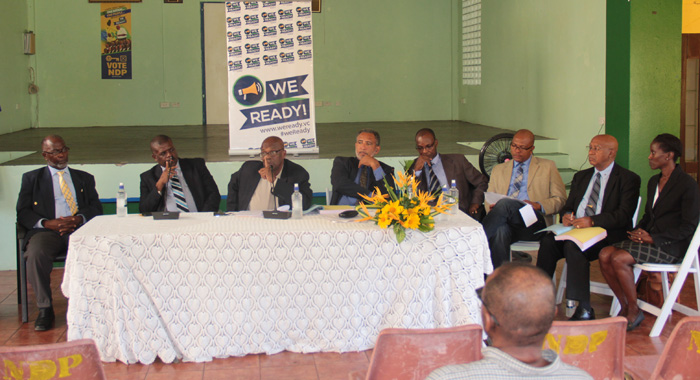 The New Democratic Party ‪(‎NDP) says its Members of Parliament will not take part in the debate of the 2016 Estimates of Income and Expenditure in Parliament on Friday.

The party made the announcement at a press conference on Thursday, where NDP president and Leader of the Opposition, Arnhim Eustace, said the figures the government will present are not realistic.

At Thursday’s press conference, MP for the Northern Grenadines, Godwin Friday, an NDP vice-president, defended the party’s decision to stay away from Parliament, saying that the national assembly is not the only place where MPs can represent the interest of their constituents.

Eustace said the NDP will stay away from the Parliament as part of its protests of the results of the Dec. 9 general election, which the NDP is maintaining were “stolen”.

Electoral officials say that the NDP won seven of the 15 parliamentary seats, while the Ralph Gonsalves-led Unity Labour Party (ULP) won eight seats, and a fourth consecutive term in office.

“We in the New Democratic Party are determined and committed to see that justice is done for the people of St. Vincent and the Grenadines.   Accordingly, we will use every proper means at our disposal to achieve that objective,” Eustace said told media personnel and party supporters at NDP headquarters — Democrat House.

He noted that two NDP candidates in the Dec. 9 elections have filed petitions in court challenging the election process and results in the Central Leeward and in North Windward constituencies.

“We will pursue these legal challenges expeditiously and vigorously because if we succeed in them, the present ‘interim’ government will come to an end and the will of the people will finally prevail,” Eustace said.

He said that in addition to the legal challenges, the NDP will continue protest action in the streets of Kingstown and in Parliament.

“In this context, the sitting of Parliament set for Friday, January 29th (tomorrow) cannot be isolated from the struggles for justice and for free and fair elections. In other words, we cannot protest the election results elsewhere and pretend otherwise in Parliament,” Eustace said.

“The conduct of Parliament cannot be separated from the heightened political struggles and battles that are taking place outside; it must acknowledge the existing conditions and reflect in some measure the concerns of the larger body politic,” Eustace said.

Eustace said the NDP has decided that it cannot be business as usual in Parliament on Friday.

“It is important, vitally so, that we send a loud and clear message to the local community and to others watching in the region and from further afield that we do not accept the legitimacy of the present interim government in St. Vincent and the Grenadines and that the political conditions in country remain unsettled and indeed precarious,” Eustace said.

He said the NDP is relying on the support and trust of Vincentians.

“We will continue to consult and dialogue with you so that we will remain well informed by what you say and by how you feel about conditions in our country.

With God’s grace and our efforts we will succeed,” Eustace said, who was flanked by the six other NDP elected representatives and the two NDP senators.

Asked if the decision of the NDP to stay away from parliament is not an abdication of its duty to the people who elected them to Parliament, Friday noted that it is part of the party’s protest of the election results.

“The presumption that when people are elected to Parliament that by a constituency that the only way they can represent them is by going to Parliament every day and doing exactly what the government expects us to do is false presumption,” he said to loud applause.

“We explained that to our electorate and we believe that the people who elect us stand by us in that regard,” said Friday, who has been representing the Northern Grenadines, an NDP stronghold, since 2001.

“As a politician, as an elected representative, part of our job is to find out what is on the minds of our people in our constituencies. I have done so, I am sure my colleagues have done so and I believe the actions we have taken are consistent with what they believe. So, it is not a question of not representing. It is a question of how you represent and you use the most effective means necessary,” Friday said.

Asked if by staying away from Parliament opposition MPs are not giving the government free rein to do whatever it wants, Friday said:

“The government, as constituted right now, has a majority in Parliament. We use our force of argument to try to persuade them to do things that we believe are right and better for the country. But they tend to be ignored.”

He said the NDP has brought motions to the Parliament to be debated as private members bill, but they have never been debated in Parliament.

“We have to choose the most effective means necessary to send the message that we think will represent our constituency.”

He said that in the present case, there is protest in Kingstown, and the petitions in court ”and we are extending that to the Parliament.

“The Parliament is not separate from what’s happening in the country and what’s happening to the people. This is a protest action that we are extending to the Parliament. And when we do it and for how long we do it will be determined by the circumstances and the decisions made by the New Democratic Party, as informed by our constituents,” Friday said.

He added: “I’ve been in Parliament for 15 years. I have debated 14 Estimates — very detailed responses to 14 Estimates in the Parliament. So nobody can question my commitment to doing my job and doing it well.”

Gonsalves, who is also Minister of Finance, is scheduled to present the Estimates in parliament Friday morning.

At Friday’s sitting of Parliament, Gonsalves will also move a resolution asking Parliament to authorise him, as Minister of Finance, to borrow by means of fluctuation overdraft or otherwise from First Caribbean Bank, or the RBTT Bank Limited, or the Bank of Nova Scotia, or the Bank of St. Vincent and the Grenadines, not more than EC$50 million, during 2016 for meeting the current requirements of the Government.

2 replies on “Oppositon MPs to boycott Estimates debate in Parliament”