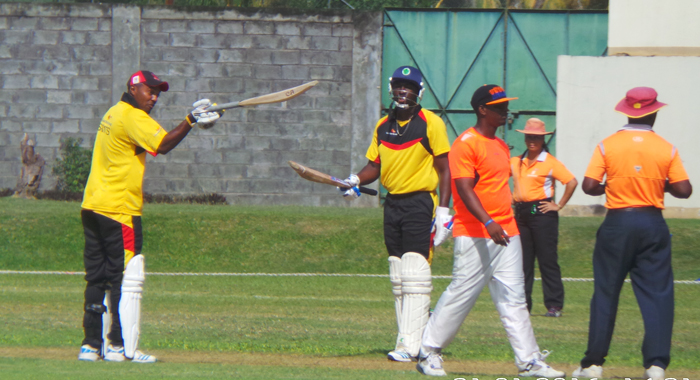 Lime Radcliffe, Guardian General Saints and Bequia all recorded victories on another weekend of action in the NLA National T20 cricket competition.

On Saturday, in one of the more exciting matches in the competition so far, Lime Radcliffe squeezed out a 4-run win from Ishaltz Byam Physical Therapy at Arnos Vale 2.

Batting first, Lime Radcliffe benefitted from sloppy fielding and got to 149/5 off 20 overs with SVG U19 opener Romano Pierre getting a top score of 44.

Let off even before getting into double figures, Pierre counted 4 fours and was fifth out at 105/5. Rodney Lawrence 32, with 3 sixes, and the big-hitting Westrick Straugh, with 26 (2×6, 2×4), also added crucial runs in the middle.

Leon Quashie, with 2/26 from his 4 overs, was the best bowler for Ishaltz Byam Physical Therapy.

With a target to chase at just over 7 an over, Ishaltz Byam Physical Therapy compounded their woes by the loss of too many wickets and looked out of it at 86/7 in the 15th over. But captain Javed Harry (36) and Jerome Samuel (23) revived their hopes with a partnership of 50 for the eighth wicket, before the latter went.

With hopes resting on his shoulders and 15 needed off the last over, Harry, after smashing the first ball for six, was runout attempting a second run.

However, the last 2 wickets could only get 4 of the required nine to see their team fall short by 4 –ending 145/9.

On Sunday at the Sion Hill Playing Field, Bequia, behind a magnificent allround display by Genre Ollivierre and superb work behind the stumps from Comos Hackshaw, extracted a 29-run win over KCCU Triumph in the morning match, which was reduced to a 17-over contest.

Batting first, Bequia were indebted to Ollivierre to pilot them through choppy waters after they had hit the reef at 54/6 in the seventh over.

They, however, had looked to be sailing with the comfort of Friendship Rose in the early proceedings after Dean Browne (16) had dispatched the first 3 deliveries of the match for 6,4,6 before being dismissed off the fourth.

From then on, wickets fell regularly with the dangerous Olonzo Billingy continuing his devilish time at the crease with another failure. His stats on Sunday’s innings underlined the hell he is going through as they read 6 minutes at the crease, 6 balls faced, 6 balls not scored from. His management may feel this could be an omen for the opposing bowlers this weekend.

With water now threateningly battering the starboard side, it was left to Ollivierre to take the wheel and ease the jib. Displaying a strong wrist, he negotiated the tempest to see his team to a position of some comfort but still exposed. He hit 57 off 33 balls in 49 minutes with 6 fours and 3 sixes as Bequia were all out for 115 in 16.1 overs– he being the eighth man out.

KCCU Triumph overcame the poor start of 20/3 thanks to a 52-run fourth wicket partnership between Kenyon Dowers (26) and Rohan Ash (28), which set them down “Victory Street”. But when things looked to be slipping out of the grasp of Bequia, Hackshaw produced a spectacular piece of work to run Ash out. A ball was played to the onside, the batsmen set off for a non-existent single and changed their minds. The fielder rushed in and threw the ball wide of the stump with Ash scrambling to regain his ground. This resulted in Hackshaw having to fly through the air parallel to the ground, catch the ball with his right glove at full stretch, then dive back to break the stump with Ash just short.

That dismissal saw KCCU Triumph travelling from “Victory Street” to “Defeat Avenue” as they moved from 72/4 to lose 6 for 14 to be all out for 86 in 16.5 overs with Hackshaw effecting a neat stumping to end a good day.

Ollivierre finished with 4/9 from 1.5 overs, while Dean Browne 2/16 and Mesach Williams 2/18 supported to give their band of mainly female supporters something to scream about.

And in the afternoon match at the main Arnos Vale Playing Field, Guardian General Saints beat Combined Youths by 44 runs in a match marred by some heated exchanges between two players.

Saints won the toss and opened with Rickford Walker and Sunil Ambris — who should have travelled to Dominica with the Windwards but was delayed because of LIAT.

They went about the bowling with gay abandon, scoring with the middle, edge and back of the bat in adding 80 for the first wicket.

The match moved from highly entertaining to high octane in the space of three balls in the sixth over when the garrulous O’Neal Endeavour was square driven to the point boundary by Ambris. The bowler then sent down a “beamer” at Ambris, which had the batsman ducking hurriedly. Ambris then left his crease walked the length of the pitch and pointing the bat in the bowler’s direction expressed his dissatisfaction with the delivery, which had been called a no-ball and the bowler warned.

The next ball a bouncer was cut ruthlessly into the Mike Findlay Pavilion for 6 and, a few bouncers and no-balls later, the over ended with the players still exchanging words.

Combined Youths reached 123/7 with Marlon Farrel 49* and Nickie Antoine 23 leading the batting. Farrel was ruled to have run “one short” off the final ball of the match thereby failing to reach his half-century. Currency took 2/16 and Nasron Samuel 2/17 for Guardian General Saints.