Comment by tourist spurs minister to clean up ‘filthy’ Kingstown 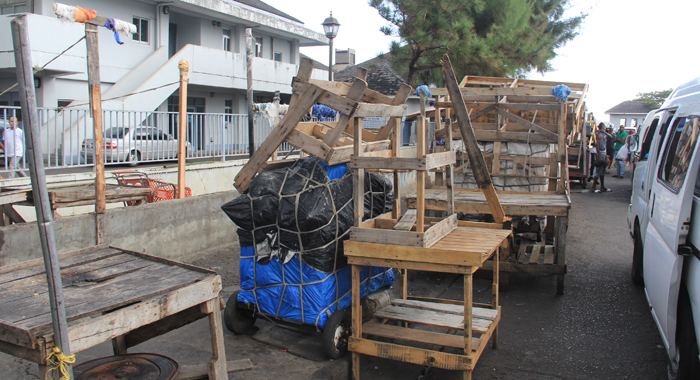 A comment by a visitor is spurring Minister of Urban Development, Sen. Julian Francis, to focus on cleaning up Kingstown again — after a five-year break.

Francis told Parliament that the nation has for years been talking about tourism, tourism sites, and developing the country.

“… but I think that Kingstown, right now, is in a state where we have to clean it up. It is the intention of this ministry to tackle this early in this year; not next year,” Francis said during the debate of the 2016 Estimates on Friday.

He said he has started work on this and has spoken to all operators at Heritage Square and told them the Government intends to clean it up.

“All these old tents and storage bins and so on will have to go. I will use BRAGSA, zip up the whole square, put pavement on it. I am not putting no pressure on the Minister of Finance on this. We will find the resources to do it, one way or the other,” Francis said.

“I have spoken to the CEO of the chamber of Commerce and it is my intention to host and call a meeting of all business owners, building, property owners in Kingstown into one hall and we are going to have a series of discussion on the approach to cleaning up Kingstown. Trust me, what I started four, five years ago, we will get it advanced in 2016.”

Francis said the walked through Little Tokyo, Kingstown during the week before the Estimates.

“And I am appalled at the condition inside of Little Tokyo. The stench, I had to move,” Francis said

He said his ministry intends to come up with a plan to “clean up Little Tokyo, clean up the city and make Kingstown as pretty as it used to be.”

Francis said he heard a tourist comment in Kingstown, saying, “Wow! This place is filthy.”

“It struck me in the middle of my stomach,” Francis, who is also Minister of Transport and Works, told Parliament.

He said he wants to introduce a ban on pallet wood.

“We use pallet wood to do everything in town and some conditions have to be put at the port and with business houses, and with container owners that when this pallet wood comes in that we have to have proper control on it,” Francis said.

He added: “It is too easily accessible, too cheap and we are building a lot of ugly looking furniture with it in the city.

“For me alone, I would recommend that all the pallet wood that is not utilised at the wharf be sent to the incinerator and burnt, so that persons can’t get access to it.”

He said his ministry will be introducing “a standard shed”.

“The idea being that we ask the private sector and business and property owners in Kingstown to get involved and we will consider some form of advertisement for them, if you funding certain areas, if you are prepared to put some funds into it, we will give you plaque space for free advertisement as recompense for your input.

“I know some will say that it is far-fetched and that the people would not get involved, but I believe that the majority of business owners and property owners in Kingstown feel the way I feel today and will get involved in this aspect of it,” Francis told Parliament.

Little Tokyo ‘needs to be knocked down and rebuilt’ — Eustace