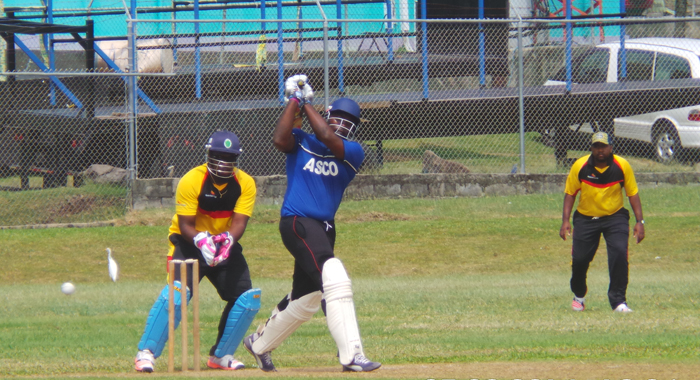 Saints, who appeared to be in a spot of bother at 37/3, were rescued by a partnership of 77 between the experienced Romel Currency (38) and Zane Edwards (37). Daron Greaves took 3/33 from his 4 overs.

ASCO, who approached the target in what can be described as bemusing fashion, lost opener Antonio Barker (0) swinging wildly across the line then captain Desron Maloney (0), bowled pushing forward, then Rodger Gibson (3), stumped. But while his teammates meekly hoisted the white flag, opener Greaves held aloft the red pennant (no quarter asked, no quarter given) as he singlehandedly attempted to take his team to victory. He was, however, handicapped by the persistent loss of wickets. Nevertheless, he continued to score at will and when the score stood at 66/5 was on 49. With a century and half-century already under his belt in the tournament, Greaves batted with confidence and ease that ruffled the Guardian General Saints’ fielders.

In the end, though, a miscalculation on his part in taking a single off the second ball of the 20th over saw him at the non-striker end with 24 needed as his partner heaved, swiped, swished at 3 balls before perishing off the fourth.

Greaves remained unbeaten on 88, which included 9 fours and 7 sixes — an innings which underlined his improved shot selection and awareness of match situation.

Police 2 put together one of their better performances to beat Bequia by 6 wickets at the main Arnos Vale Playing Field.

Winning the toss and batting in ideal conditions and on a good batting pitch, Bequia, behind a brilliant innings by Dean Browne, scored at over 9 runs an over for most of their innings.

Browne, who batted the entire 20 overs, was unbeaten on 90, made off 54 balls and included 7 fours and sixes. Jenry Ollivierre got 39 and featured in a fourth wicket partnership of 68 with Browne. Parnel Browne took 2/25 from his 4 overs.

Police 2 fired a fusillade of shots through openers Mclean Williams and Salvan Browne that had Bequia diving for cover from early.

It was Williams who provided the heavy artillery with devastating effect as Browne, who went with the score on 45 in the fifth over, only contributing 2.

Despite going at a good clip, the lawmen were nervously placed at 58/3 in the seventh over after losing 2 wickets at the same score.

But the team’s “cricket brain”, Parnel Browne, joined Williams in a partnership of 114 for the third wicket that all but sealed the win. Browne got 54 and was dismissed to make the score 172/4. He struck 6 fours and 2 sixes and faced 33 balls. Williams (93*) easily administered the final rites in partnership with Gosnel Cupid (*11).  He batted 58 balls struck 5 fours and 7 sixes. Mesach Williams took 3/31.