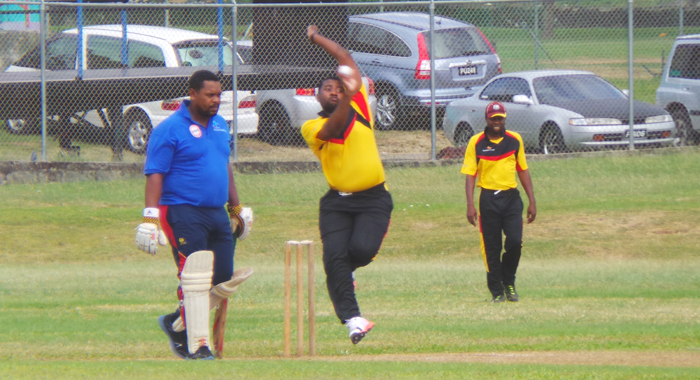 Nazron Samuel 2/21 gets the early breakthrough.

Lime Radcliffe showed their experience by easily disposing of a game but fragile Bequia Unit at Arnos Vale 2.

Batting first, Lime Radcliffe endured a few anxious moments in their innings and looked shaky at 113/5 in the 13th over. But once again, the big hitting Rodney Lawrence (56) and Richie Richards (37) raised a partnership of 93* to take the initiative from the Bequia Team.

The pair racked up 68 off the final 5 overs as the guys from the Cays wilted under the onslaught.

Lawrence struck 5 fours and 3 sixes off of the 37 balls he faced while Richards faced 18 balls in contributing to the carnage with 2 fours and 2 sixes. Romario Pierre got 39 (4×4 2×6) and captain Lindon James who was run out 35 (5×4, 2×6). The Bequia bowling was nothing to write home about except to say that Chelson Stowe solitary over in which he sent down 9 wides went for 21 and Olonzo Billingy gave away 25 from his 2 overs, thereby epitomising the level at which the visitors lost control in the closing stages of the innings.

With a required rate of over 10, Bequia had no alternative but to “have a go” and captain Cosmos Hackshaw and Dean Browne were on full horsepower from early. They added 44 for the first wicket before Browne (11) went LBW to Othneil Lewis off the second ball of the fifth over. Hackshaw (32) was then caught controversially off a high full toss with just 3 runs added in the same over. After that, the fight left the Bequia team as they slipped to 55/5 to be eventually all out for 132 with Rajiv Roberts 20 and Stowe 19 going out with a late order flourish.

Inside Arnos Vale, Northern Stars notched up their third win in 4 matches with a 7-wicket win over Radcliffe Too.

The victory, while coming easy in the end, appeared not so when Radcliffe Too were 75/2 in the 12th over. However, it all fell away with the introduction of spin from both ends.

Winston Samuel (3/21), bowling from the Airport End, had double success in his second over to start the slide. The experienced Javon Samuel, bowling his left-arm spin from the Bequia end, then joined the fray and giving the batsmen little to work with reaped a good harvest.