T20 organisers say no to ill-discipline 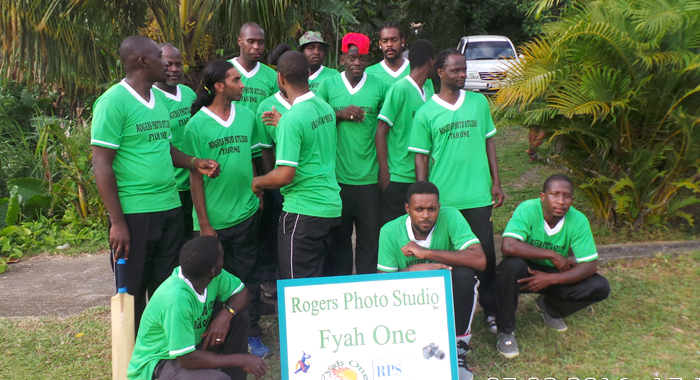 The fifth edition of the SVG Police Co-operative Credit Union Clinchers 20/20 Softball Cricket Competition, began with a warning to teams that ill-discipline will not be tolerated.

The competition began on the weekend with a ceremony consisting of a parade of some of the competing teams along with addresses.

Giles said: “The 2015 tournament was our most challenging, with many incidents of ill-discipline, with some extremely outrageous and offensive taking place… We subsequently received letters of apology from those who were involved in such behaviour and accepted their offer of contrition.”

However, he indicated that the organisers would not be tolerating any such re-occurrences in 2016.

“Let me make it clear here today, February 7th, one week from Valentine’s Day, that there will be no kiss and make up this time around,” he quipped.

“We have revised the regulations of this tournament and I urge all teams to read them carefully, for you will face suspension or even expulsion for any action which is deemed to bring this tournament into disrepute,” Giles warned.

Giles further projected his club’s intent to continue to build on past experiences.

“It is our intention to continue to strive to make the Police Co-operative Credit Union Clinchers T20 Softball Cricket Tournament one of the best, if not the best organized in SVG,” Giles boasted.

The Clinchers vice-president said that his organsation is prepared to uphold the good name of the tournament, which it has built since 2012.

“The past four years, we can say and based on our discussions with these sponsors, have been very satisfying and it is our intention to make the 2016 edition even better with the help of the sponsors, teams, officials and spectators. I can boldly say that this tournament receives more coverage than many other sporting events here…Many of you I know have seen the many pictures not only of players, but of spectators as well and articles in the media and on Facebook giving weekly updates of the tournament. It really lifted the profile of the competition and I am sure that the sponsors would have been extremely happy with that level of coverage,” Giles commented.

“The Police Credit Union does not wish to be associated with anything that does not exemplify good conduct… So, as you play in this tournament, do not just play just to win a trophy, but play to make friends,” Simmons said.

Prince indicated his intention to do some work on the washroom facilities and areas of the hardcourt and Playing Field which needed some attention.

Smart Strikers were adjudged the best-uniformed team, with Bank of SVG All Stars second and Clinchers third.

Rodgers Photo Studio Fyah One the only team with a banner easily took the “Best Banner” prize.

In the season’s curtain-raiser, a Combined Team beat Police Co-operative Credit Union Team, while Clinchers got the better of BOSVG Allstars in the final of the ball-o-rama

The Competition will get going in earnests this weekend with five matches listed to be played.

On Saturday, Feb. 13 from 12.30 p.m. at Sion Hill, Tallawahs will meet Bank of SVG Allstars and from 3 p.m., Fullyloaded Ballerz will meet Street Fighters.

On Sunday, Feb. 14, from 10 a.m., Mount Pleasant Strikers will meet Snipers Reload and this will be followed at 12.30 p.m. by a clash between Smart Strikers and Rogers Photo Studio Fya ONE.

The final match of the weekend will bring together Dr. Thomas Injectors and Budgemart Simple Touch from 3 p.m.

All matches at the Richland Park Oval and teams are asked to be at the venue at least 15 minutes before the commencement of their match.

Teams are asked to note, as per the playing conditions, new balls must be used at the start of each innings.