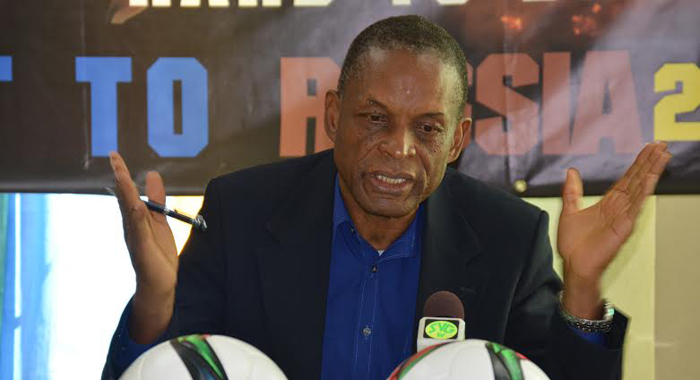 Speaking at a media conference this week, Coombs said that there were sceptics who scoffed at his decision to take the country into FIFA in 1988 and the benefits coming to the country currently and those to come in the future is testimony to his vision back then.

He said that an attitude of pessimism even came through the media with one journalist questioning if the country stood to benefit and in what way.

“Today I am sure that journalist and others like him are hearing and seeing what we are getting from FIFA. Our football is developing and we are advancing in the area of infrastructure with our Goal Project at Brighton,” he said.

He said that C license Course and a Grassroots programme — the fifth in two years — will be held here soon.

Coombs took the opportunity to inform the public of a running dispute between the SVGFF, a shipping agency and a supplier in China which has resulted in equipment and furniture for the Brighton project, sitting in a container at the Port for over a year. He said that the problem stems from a payment of US$6,900, which is being demanded by an individual as added payment, even though they have been assured by the agent that there are no monies outstanding.

He said the matter has been taken to court and there have been attempts the get the government through Prime Minister Ralph Gonsalves and the Attorney General’s Chambers to look at the matter.

He said that more benefits are coming the way of the SVGFF with the purchase of a property in Kingstown to use as their administrative centre.

“We are now more or less the owners of this property as FIFA has paid the EC$400,000, which was the agreed down payment and the lawyers of the SVGFF and those for the owners are in the final stage of preparing the documents for the transfer of ownership,” Coombs said.

The president said that the purchase of the property should have been completed about two years ago but was put on hold owing to what he termed as mischief by “disreputable persons” in his last executive.

He said that with those persons being voted out of office at the last elections, the process was resumed and carried through by FIFA.

Coombs said that the coming on stream of the Administrative Centre will see the SVGFF saving almost EC$5,000 monthly in rent and it will also help them to make money since there would be space for rent.

The president disclosed that in relation to the senior Men’s National Team, “Vincy Heat”, they would be playing a friendly against Martinique on March 11 at Victoria Park and possibly one against St. Kitts before the Russia 2018 World Cup Qualifier against Trinidad and Tobago on March 25 in St. Vincent.

He said that the SVGFF was in the process of identifying overseas players with Vincentian connection who has an interest in playing for SVG and had the required standard for the Digicel Cup and the remainders of the World Cup campaign. He also pointed out that injured players Myron Samuel and Corneilus Stewart were on their way to recovering fully, with Samuel already back to playing and Stewart “coming along”.

The president said he has written to FIFA for assistance with gear and equipment to have a national U17 island-wide tournament.