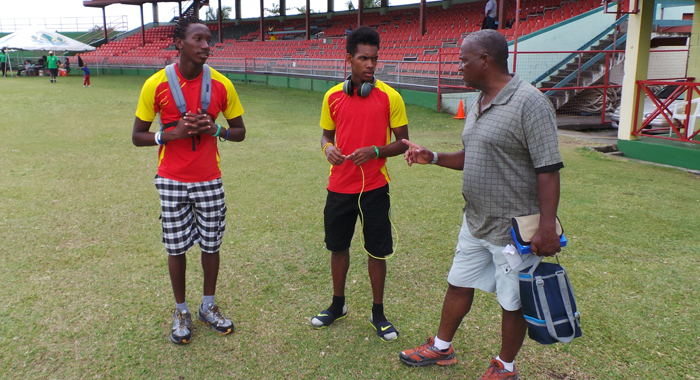 General Secretary of the St. Vincent and the Grenadines National Olympic Committee (SVGNOC), Keith Joseph, is to contest the presidency of the Pan American Sports Organisation (PASO), another regional athletics body, for the second time in nine years.

In 2007, Joseph was beaten by Jamaica’s Teddy McCook in the race for the presidency of North American, Central American and Caribbean Athletic Association (NACAC).

Joseph, who, reports say, was favoured by the outgoing long-serving president, Amadeo Francis, then, lost by a solitary vote to McCook, who served for one and a half terms until his death in 2013.

But, mystifyingly, despite coming so close to taking the top post in 2007, Joseph’s name never featured as a possible candidate when McCook died suddenly in 2013. In fact, when questioned about his apparent slide down the pecking order, Joseph only chose to adapt his now customary evasive persona by either shifting the conversation or make a humorous remark. Haiti’s Alain Jean-Pierre was appointed as interim president following McCook’s death, with Victor Lopez the current president being elected a few months later.

Checks with persons with knowledge of the organisation revealed that Joseph’s popularity was apparently based on his close association with Puerto Rican Francis back then. Francis in 1988 was elected the first president of the then newly formed NACAC.

Now, almost a decade later, Joseph is offering himself as one of many candidates in the race to succeed Uruguay’s Julio Maglione in the PASO top job, a report on sports website “Inside the Games” has revealed.

The website also said that St. Lucia’s Richard Peterkin has also indicated on Twitter that he intends to stand, but indications are that he could be barred from running if a new constitution is adopted.

Joseph is already a senior PASO figure, currently serving as third vice-president and was one of the people who gained an audience with IAAF presidential candidates, Sebastien Coe and Sergei Bubka just prior to the elections, which were won by Englishman Coe.

His nomination letter, reportedly penned by the executive of the NOC, is said to have identified Joseph’s strength among other things as his “immense knowledge, experience and proven commitment and abilities”, the website stated.

The letter further said: “Over the years, as our general secretary, Mr. Joseph, has displayed an eagerness to advance the cause of the Olympic Movement in the Americas, always advocating the principle of fair play in our decision-making.

But, while Joseph appears to have goodwill and a desire to help with the development of “the numerous National Olympic Committees (NOCs), national federations and other sporting organisations”, the operations of the SVGNOC has raised many eyebrows with the inordinate long period of time between meetings and elections as well as whispered concerns about accountability.

One local sports administrator acknowledges Joseph’s competence and efficiency but was not comfortable with the level of transparency surrounding Team Athletics SVG of which he is a long-serving president and the NOC, which he has remained as General Secretary for more than a decade and a half. The administrator, however, wished Joseph “all the best” in his bid.

Inside the Games said the Dominican Republic’s José Joaquín Puello has already officially declared his candidacy, and, according to the site, a number of others are now expected to follow.

It said that Rio 2016 President and PASO second vice-president, Carlos Nuzman, is viewed as a near certainty to enter the race and is widely seen as favourite to take over from Maglione. Another likely contender is Chilean Olympic Committee President, Neven Ilic, mentioned by Peterkin in his twitter message.

The website said that Neither Peterkin, Ilic nor Nuzman has formally declared their candidacy.

Indications are that the election is due to be staged at an Ordinary General Assembly later this year, and probably after the Rio 2016 Olympic and Paralympic Games. Before that, in early May, an Extraordinary General Assembly will be held to agree and adopt a new PASO Constitution. It recently emerged that this meeting would take place in the Brazilian capital, Brasilia, almost coinciding with the start of the main Brazilian leg of the Olympic Torch Relay that will transport the Olympic flame to the Maracanã Stadium for the start of Rio 2016.

And, according to sources, it is the requirements to be a candidate in the race as spelt out in this new constitution that could negatively impact Peterkin’s attempt at contesting the Election.