Deputy PM says US trip is for annual check-up 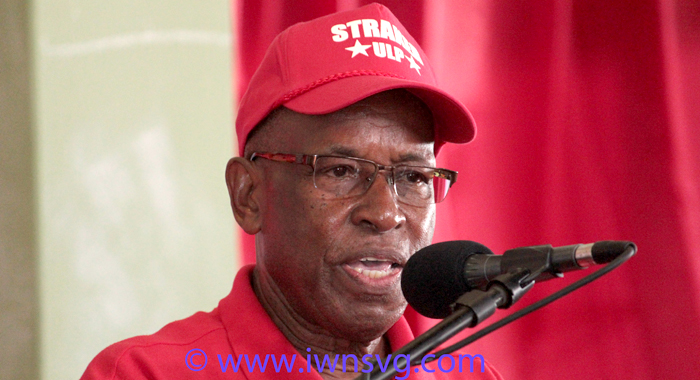 Straker, who turns 72 on Feb. 23, said, however, that he was in the United State for his annual check-up and was discussing with his doctors the scheduling of the removal of a “small cataract” from his left eye.

In a call to a local radio station, Straker, who came out of retirement last year to contest Central Leeward for the Unity Labour Party (ULP) again, said that he was in New York for a check-up that he should have had since last September.

Foreign Affairs, Commerce and External Trade Minister sought to assure listeners that he was in good health.

“Nothing is wrong with me. In fact, when I took my pressure with my general practitioner, my pressure was 120 over 80. He said, ‘Man, you are a young man.’ My diabetes count was very good, my prostate is alright, my cholesterol is OK. The basic thing is just for me to see the specialist with my eye and get some dental work done. I am fine! Let them know that I am fine. I hope people are hearing this,” he said.

Straker, who did not inform the nation that he was travelling overseas for medical attention, told the radio programme that the “rumour mill” of the main opposition New Democratic Party (NDP) seemed to be going crazy.

He said had received calls about whether there was any truth that he left St. Vincent in an air ambulance or whether he had to be taken by ambulance from the airport in New York.

“I don’t know where all this madness and stupidness come from. I am well. I should have been up here since last year. Once a year, to take advantage of my insurance, health insurance, I come to the United States for a full check-up,” Straker said.

He said he did not go to the United States last year although he had a ticket to travel in September.

“I didn’t use it and I had a year in which to use it. I lost some money but because of the campaign, I didn’t come last year, but I decided to come this year because really, mostly, it is my dental work and the doctor told me about a year and a half ago there was a small cataract in my left eye and I must make sure I come back in six months. It’s more than a year I hadn’t seen the doctor. I decided to come at this time.

“I am feeling fine and I don’t know where they are getting this stupid rumour from that I was sick.

“Everybody saw me up to the Friday I left there. I was in Kingstown, I was walking around, I showed up at my job and I left Friday night and I am here and I don’t know where they got this stupid thing from that I am sick and I am dying or I had a stroke and all this foolishness from.”

Straker was MP for Central Leeward from 1994 to 2010 when he retired from electoral politics. But the party called him out of retirement last year, amidst a strong challenge from the NDP’s Ben Exeter against then MP, Maxwell Charles, who the ULP retired after one term.

Straker said that he and Central Leeward have a love affair.

He said the NDP had it in their heart that they were going to win Central Leeward and put it with the other seven seats that it had in the last Parliament and form the government in the Dec. 9 elections.

The ULP won the vote by eight seats to the NDP’s seven.

“So, I don’t know why they are going crazy. They are making themselves look like fools. They are putting up all this propaganda and making it look as if something is wrong with me in Brooklyn.

“I am well. I am sitting in my living room right now, waiting to go to see a retina specialist and to get my OK to see whether I have to have the surgery now, or if I can put it off.”

He said he was told that he would need a month in Brooklyn for the eye surgery and follow-up care.

“And I don’t want to stay very long up here, because I want to be home for the Budget. But these folks, they manufacture their own foolishness and there are fools like them who believe this kind of story.”

The Budget Debate is scheduled to begin on Feb. 22.

Straker said that he had notified the Cabinet of his intention to travel and had also told his constituency council and other “prominent people” in the Constituency.

He, however, said that he did not inform the Speaker of the House of Assembly.

The government did not inform the nation that Straker was leaving the country.