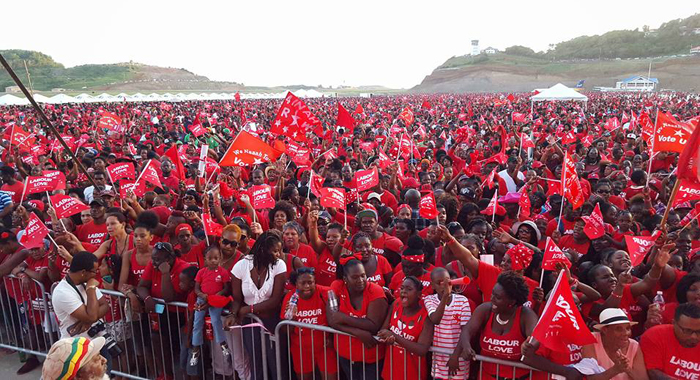 The minibuses were hired to transport persons to ULP election rallies, including this one at Argyle on Dec. 6, 2015.

The ruling Unity Labour Party (ULP) has confirmed that it is yet to pay some owners of minibus for services they provided to the party transporting persons to campaign events for the Dec.9 general elections.’

One of the van owners, who asked not to be identified in this story, complained to iWitness News on Thursday, saying tat he hopes that by going to the media, the party would act swiftly to settle the EC$2,500 bill it has with him, as well as monies owed to other omnibus owners and truckers.

“During the election, my van was contacted to transport people from the South Leeward and Central Leeward constituencies and we had been transporting people from the night election was called and up until today, we have not been paid. It is not my van alone but a lot of other vans throughout the country,” the van owner told iWitness News.

He said that van owners owed by the ULP have been contacting the party asking about payment.

The van owner said that his minivan was used to transport persons to different areas across the country.

“From Kingstown, to Arnos Vale, to Calliaqua, to Argyle at the international airport site — different places. On the Leeward side, we did one in Campden Park; we did one in Barrouallie,” the van owner told iWitness News.

“And we have not been paid for most of the trips.”

He said that the ULP had persons in different constituencies who were in charge of hiring minibuses.

The owner told iWitness News that it is the first time he had provided election campaign transport services for the ULP.

“But a lot of van drivers decided that they weren’t going to do it this election, based on what happened in previous elections. But this is actually my first election transporting people for them, but it is real problematic to get your monies.

“And that is just one van. The truck owners who had systems on their trucks, they are also faced with the same problem. From what I have been told by minibus drivers, one candidate is starting to pay vans out of his own personal expenses. So, the rest of us just have to sit back and wait.

“And it’s really overbearing because two months have gone since elections and it is bare run around because nobody is even giving us a date or a time. When we call the ULP headquarters the ladies are saying it is out of their hands, they don’t know how soon; they can’t give us any information as to how soon we would be paid and we should just hang in there and hold the faith.

iWitness News visited the ULP headquarters on Tuesday and a woman at the front desk asked for the name of the minibus owner who had complained to iWitness News.

iWitness News said that the owner does not want his identity revealed.

“So then, if his identity can’t be revealed, how would I know if that person got paid or not?” the woman asked.

“Well, he says he is not the only person,” iWitness News responded.

“We have some outstanding payments, but it just means that if I don’t know [who the person is], I can’t just go on the computer and check to see if whosoever got paid,” the woman responded.

She, however, said that she has no indication of when the outstanding payments would be made.