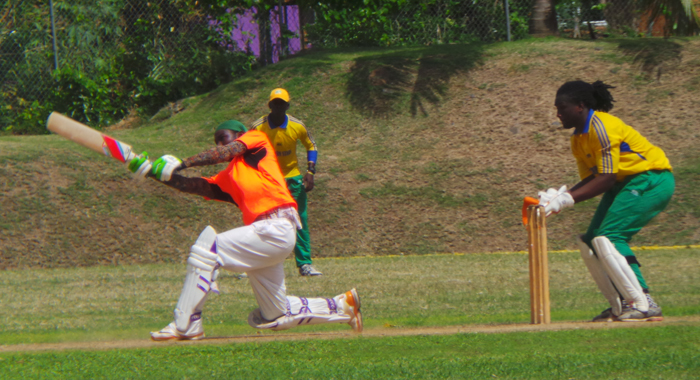 Oneil Endeavour fought a lone hand but could not stop his team, Combined Youths ,from going under to Northern Stars by 44 runs in their NLA T20 match at Arnos Vale last weekend.

Combined Youths upon winning the toss asked Northern Stars to take first knock in good conditions and they gleefully accepted the invitation.

Losing the early wicket of Joe Soleyn (11) with the total on 18, Northern Stars then shifted gears as Vidal Edwards (31) and Sharma Hooper  dominated the bowling with a partnership of 90 for  the second wicket.

It came to an end when Nickie Antoine collected his second wicket by having Edwards caught. Hooper and captain Elron Lewis (13) then saw the total to 129 before the former went. His dismissal saw 3 wickets going for 7 as the score read 136/5 and they were pushed back even further at 159/7. Hooper made 56 and struck 8 fours and 1 five as his team which had looked to be bearing down on 200 were dismissed for 179.

Nickie Antoine, who made the early breakthrough, finished with 3/35 and Kevin Samuel 3/10 at the end.

Combined Youths were in early trouble at 18/3 as the nippy Kimali Williams created problems with his pace and movement. The innings from that point, never settled and it was left to Endeavour to stage a one-man show that gave his team some respectability.

After taking 11 balls to get off the mark and taking a few blows to the body, Endeavour then launched his 12th ball over the long on boundary. And from then on, with eyes opened and confidence overflowing, he dispatched the bowling with ruthless efficiency even as wickets continued to tumble around him.

When the dust had settled he remained unconquered on 67 off 45 balls which included 8 fours and 4 sixes and his team 133/9. Williams finished with 3/15 from four overs and Jadiel Chance 3/15 from one over.

The News Spartans defeated Bequia Cricket Association by 9 runs. The News Spartans 93 for 9 off 18.3 overs, Olonzo Billingy 3 for 29 off 4 overs; Bequia 84, Micah Joseph 3 for 4 off 3.4 overs. Guardian General Saints defeated Radcliffe Too by 6 wickets.