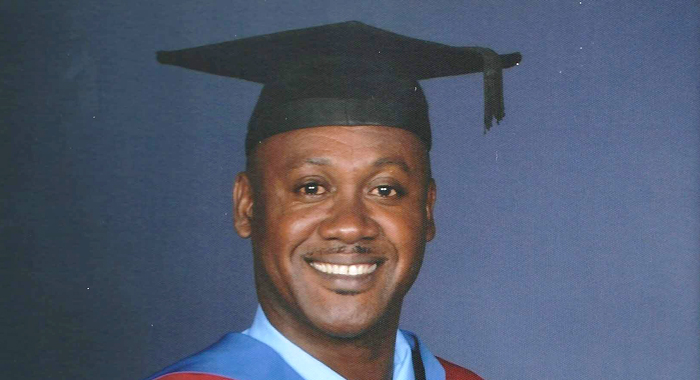 Sergeant of Police Brenton Smith, who recently graduated in the United Kingdom with a Master of Science in police leadership and management, is hoping he will get the opportunity to utilise his training in helping to transform the Royal St. Vincent and the Grenadines Police Force in a positive way.

Smith graduated from Leicester University on Jan. 21, after completing his studies, which concentrated on sociological and biological theoretical perspectives of policing; policing and crime prevention; leadership and management; research methods; community policing and police leadership in the 21st century.

His thesis was on the topic: “The Effectiveness of the Royal St. Vincent and the Grenadines Police Force in Reducing Murders”.

He also used the opportunity to encourage other police officers to pursue higher education through Leicester University or other universities, which offer programmes in a wide array of law enforcement subjects.

“One should also remember it does not lead to benefitting one’s self alone, but the country,” Smith said.

Smith is thanking God for helping him to complete his programme.

“This would not have been possible without the help of Almighty God,” said Sergeant Smith, who also ushered thanks to Glenda Abraham along with family and friends for encouraging him to pursue the master’s programme.

He said he is dedicating his successful completion of the Master of Science in police leadership and management to his first child, Patreka Smith.

“When I was in Form Five, I had my first child. I was allowed to do my subjects, but not allowed to graduate,” he said, adding, “That was painful.”

The Royal St. Vincent and the Grenadines Police Force congratulates Sergeant Smith and wishes him well in his future endeavours.