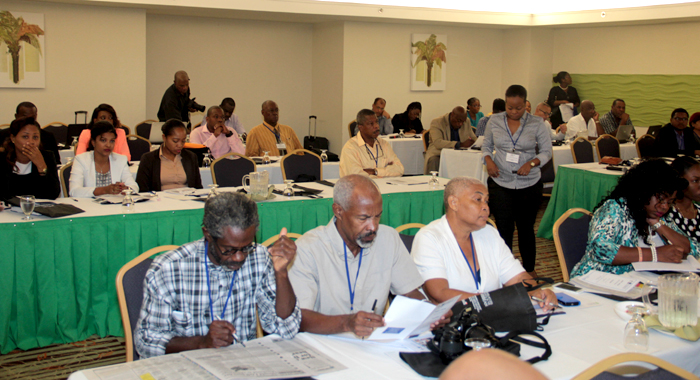 Some of the participants in the Regional Media Law Workshop. (IWN photo)

BRIDGETOWN, Barbados — Journalists from across the Caribbean on Tuesday began a two-day training workshop on media law with a reminder of the need to set standards in the face of changes to the media resulting from information communications technology tools.

“With the growth of social media, and at a time when any member of the public armed with a smart phone can become the lead reporter of their own ‘newscast’, it is even more critical for journalists and broadcasters to set the example of ethical, accurate and fair journalism,” said Gail Miller, senior director of the Caribbean Regional Programme at the Canadian High Commission to Barbados.

The Regional Media Law Workshop is part of a series of public legal education events for CARICOM Member States under the Canadian funded “Improved Access to Justice in the Caribbean” (IMPACT Justice)” Project implemented by the University of the West Indies through the Caribbean Law Institute Centre at the Cave Hill Campus.

The BDS$30 million UWI IMPACT JUSTICE project is aimed at ensuring better access to justice for vulnerable and marginalised communities in the CARICOM region, as well as by governments, the private sector and civil society as a whole.

“The project supports the development of model laws for the region, improving access to legal materials and to legal education by practitioners and the public. It promotes the use of alternative dispute resolution mechanisms to take the burden off the courts and build peaceful communities,” Miller said.

“Long gone are the days when the print media and other traditional news providers were the predominant source of information to the public,” Miller said.

The workshop aims to increase knowledge of the rights of journalists and the legal parameters within which they are expected to operate.

The topics include confidentiality of sources, defamation in the context of media law, online reporting, parliamentary and government reporting, and reporting on family matters and gender issues, and features presenters from across the Caribbean.

Miller said that Canada’s programming to strengthen the rule of law fulfils part of its almost BDS$1 billion in development assistance through the Caribbean Regional Development Programme.

“The aim of the programme is a more prosperous and integrated Caribbean Community able to generate sustainable economic growth, providing opportunity and security to its citizens,” she said.

Through this broader programme, Canada also focuses alongside the rule of law on strengthening public sector management through technical assistance for fiscal and economic reforms, debt management initiatives with partners like the Eastern Caribbean Central Bank; and leadership capacity building.

The programme also focuses on promoting business development and trade through access to finance, simplification of administrative regulations and demand-driven vocational training.

Another objective is strengthening resilience to natural disasters through support to community-based risk reduction efforts and institutional support for disaster preparedness.

IMPACT Justice is one of two programmes in the Caribbean to which Canada has committed BDS$62 million in funding.

The other is the “Judicial Reform and Institutional Strengthening in the Caribbean Project” (JURIST) is delivered through the Caribbean Court of Justice.

Meanwhile, Regional Project Director, Prof. Velma Newton, told participants that the main components of the project include the drafting of legislation for the economic and social development of the region, under which model mediation, sexual harassment and a major organised crime bills have been drafted.

“These are now to be discussed in the region and copies passed to the Attorneys General,” she said.

Another component of IMPACT Justice is improving legal professionalism through enhanced codes of ethics, disciplinary procedures and the encouragement of bar associations to adopt continuing legal profession programmes for their members.

“All of these objectives are good for attorneys in keeping them abreast of legal developments and also good for their clients, many of whom wonder why doctors and accountants have to undergo continuing professional training but not lawyers in the region, except in Jamaica, where there is a programme in place,” Newton said.

IMPACT Justice also includes improving and expanding databases of court decisions and legislation and articles published in the region that are available to lawyers and the public who want to do legal research, including journalists.

There is also a public legal education programme under which the coordinators have prepared leaflets on aspects of the law in simple language.

A final element is alternative dispute resolution training and use.

One reply on “Caribbean journalists receive training in media law”