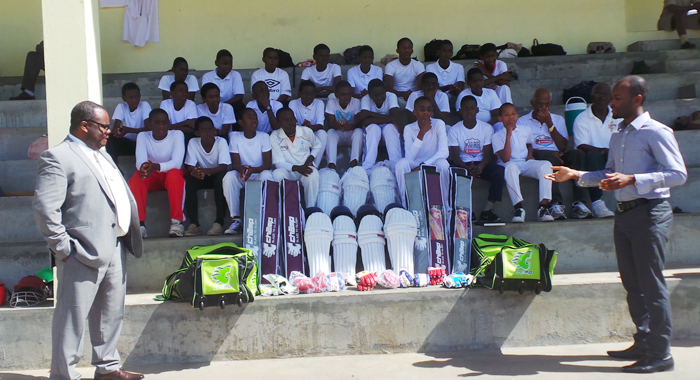 Fitzaudy Wright of Scotiabank hands over the equipment to Kishore Shallow of the SVG Cricket Association.

Scotiabank has donated a quantity of cricket equipment to the St. Vincent and the Grenadines Cricket Association (SVGCA) as part of its sponsorship of the inaugural Junior Secondary Schools Cricket tournament, now taking place.

In addressing the event, Wright urged the young players of the St. Vincent Grammar School and the Thomas Saunders Secondary Schools who were in attendance that they must take the game seriously as there was money to be made from sports.

“Sports is big business and, therefore, you must a make a special effort to get to the top by training hard and being disciplined. In addition, you must play hard and play to win because I like winners. But you must never try to win at all cost,” he said.

Wright also highlighted Scotiabank’s support for cricket, and, in particular, the Scotiabank Kiddy Cricket programme, which is played by children across the Caribbean, pointing out that the programme had been the starting point for many young cricketers, including SVG’s West Indies U19 batsman, Gidron Pope, who was part of the team that won the 2016 ICC U19 title last month.

Reports show that over the last 16 years, nearly a million Caribbean children at over 700 primary schools have received their first formal training in the basic skills and techniques of cricket through Scotiabank Kiddy Cricket’s coaching programme.

Scotiabank is the longest-serving current sponsor of West Indies cricket

Shallow thanked Wright for what he termed as Scotiabank’s timely intervention in assisting the SVGCA and the Ministry of Education to hold such a tournament. He commended the Bank on its vision and commitment in supporting young sports people.

Shallow also encouraged the young cricketers to try and follow in the footsteps of Pope but told them that in order to do this, they must be prepared to work hard.

The total sponsorship of the tournament is EC$20,000, with six schools taking part.

Batting first after winning the toss, Thomas Saunders Secondary reached 159/9 in their allotted 30 overs with opener Ottley getting a topscore of 31.

Displaying good technique, the left-hander struck 5 fours and featured in a partnership of 58 for the third wicket with Kedon Hackshaw 28. Kemron Straugh led the St. Vincent Grammar School’s bowling with 2/22.

Hinds, who has been possibly the country’s foremost authority on youth cricket, told iWitness News that the Junior Secondary Schools competition has unearthed some good talent, which, if not for the competition and the initiative of Wright, could have gone unnoticed.

Shallow lauded praise on Hinds, whom he said was the person who initiated the sponsorship.

The tournament is expected to end on March 7.